Cheer and Pom Teams Invite You to Daytona Beach

Award-winning squads prepare to compete at the National Showcase. 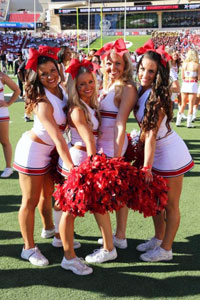 The cheer and pom squad routines will be showcased at 3 p.m. Sunday (April 6) at the United Spirit Arena.

Also during the showcase, three partner/group stunt qualifiers will showcase their routines.

Two co-ed stunt couples and one all-girl stunt group will compete in their stunt routines on April 12 after the team competitions. They qualified by submitting a 45-second video of elite stunt combinations in December.

According to Texas Tech cheer coach Bruce Bills, in the past seven years cheer has finished in the top five teams in the country, coming in at third place in 2013 and 2012 and second place in 2011. This year, the pom squad will compete in two divisions – open dance and hip hop. Coach Erin Harold led the pom squad to its highest finish, third place, in last year’s open dance division.

“The nationals’ routines are unique because they highlight some of the most elite skills in cheer and dance,” Bills said. “The skills you will see the squads perform are different from football and basketball game days because of the floor restrictions and in-game rules.”

During the summer, both teams qualified for nationals by attending camp and receiving Gold National’s Bids. Skill elements and choreography practices began in September with final enhancements being added in early March during two-a-day practices.

The showcase is open to the public with free admission. Donations of support will be accepted at the door. Please use the northwest street-level entrance to the arena; park in the north lot and come downstairs to the main court.