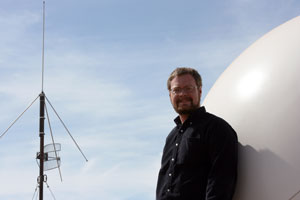 Researchers will study the turbulent texture of storm clouds.

A Texas Tech University atmospheric scientist recently received a $738,000 CAREER grant from the National Science Foundation (NSF) to study electrical energy and how it behaves inside storm clouds.

Eric Bruning, an assistant professor, earned the five-year grant that will use the help of an art professor to convey how the turbulent “texture” of the winds in storm clouds relates to the “texture” of lightning within the cloud.

“We see and have studied lightning as it exits the cloud, but we still don’t know that much about what happens inside the cloud,” Bruning said. “We have the right tools available now, so let’s see what else we can learn about it. In the world of physics, the source of energy that drives things we observe plays an important role, and this project will help us learn how that functions in deeper detail for lightning.”

The NSF’s CAREER program is among the most prestigious awards in support of junior faculty who “exemplify the role of teacher-scholars through outstanding research, excellent education and the integration of education and research within the context of the mission of the organizations…and build a firm foundation for a lifetime of leadership.”

Bruning operates the West Texas Lightning Array (WTLMA), which consists of 10 instrumentation platforms spread across Lubbock County. Texas Tech’s Office of the Vice President of Research funded the WTLMA, and it is among a regional cluster of LMAs that covers all of West Texas, the Texas Panhandle and much of Oklahoma. Usually funded by research grants and run by interested university faculty, each LMA needs at least five individual stations to enable effective triangulation of lightning.

Bruning said this CAREER project will help future meteorological researchers by building a strong theoretical foundation on lightning’s properties. Carrying up to 100 million volts of electricity and killing an estimated 2,000 people a year, scientists estimate lightning strikes the ground about 100 times per second around the globe. Still more can be learned about this natural phenomenon, he said. 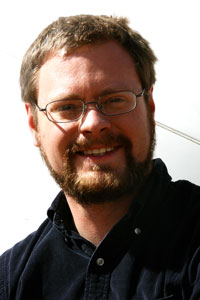 Researchers will work on a two-year field campaign called Kinematic Texture and Lightning (KTAL), which will take a closer look at the concept of “texture” of the winds and the texture of the lightning.

“By looking at data in high resolution with mobile radars and comparing them to the WTLMA data, we’re hoping to establish fundamental new ideas about lightning and how it is distributed in thunderstorms,” Bruning said. “Texture is similar to the idea of thread count in bed sheets, which are pretty similar to each other until you take a more detailed look at the thread count and then you start to notice the differences. Meteorologists use a similar analogy in statistical analysis of the winds. Lightning (or other types of cloud energy) can look much the same on the whole, but it’s not until you take a closer look that you realize the wide variation of one flash to another, the difference in ‘texture’ of how flashes fill the cloud.”

Bruning will work with Tina Fuentes, a professor in the School of Art to convey this idea of texture in artistic terms. He wants to learn about the particular language that artists use to describe the idea of textures, and then use that knowledge with his future work.

During their initial talks, Bruning and Fuentes said they discovered large amounts of overlap in each of their academic disciplinary vocabularies.

“Here were a scientist and an artist starting as potential collaborators – very different worlds – and we’re using similar words to discuss what our plans are: space, light, luminosity, texture... I was very excited when I realized this,” Fuentes said. “To join science and visual art is cutting edge as we’re very closely linked in many ways. They are both highly creative fields.”

Bruning plans to share his results with others by making the data and software used to analyze it open to the scientific community to further scientific endeavors.

“Just imagine what advances could be made if researchers could quickly access and reproduce what’s already been done and then add their contributions,” Bruning said. “There’s no limit.”

President M. Duane Nellis said he is proud of Bruning and his dedication to his work and Texas Tech.

“NSF career awards such as this are recognition of the outstanding junior faculty we have hired at Texas Tech as we move aggressively forward as a national research university,” he said.

Lindquist Named Dean of College of Arts and Sciences