Miguel Levario, associate professor in the Department of History, reviews the life of the civil rights activist. 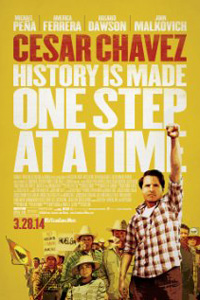 With “Cesar Chavez” hitting theaters March 28 and Cesar Chavez Day being March 31, Miguel Levario, Texas Tech University associate professor in the Department of History, comments on the significance of the civil rights activist and having his life portrayed on film.

From a historical standpoint, was it necessary to make this biopic? Why or why not?

Cesar Chavez may not be as universally known as Martin Luther King, Jr. or Rosa Parks, but he is well known throughout the Southwest and the country, especially in agricultural areas. In fact, the United Farm Workers Union was a major supporter of Sen. Robert F. Kennedy's presidential campaign in 1968. It was Kennedy who gave Chavez his first piece of bread after his first hunger strike. So, yes from a historical standpoint this film is very necessary, in part to address reasons for his popularity.

Chavez led one of the largest labor movements in United States history. Farm workers were never organized and did not have basic rights or protections. Moreover, their status in the United States and their working conditions were considered by many experts as modern-day slavery. Therefore, the impact and range the movement had on people is extensive and as meaningful as any human rights initiative in the world. It is historically and culturally important the United States recognizes one of their own who lived up to the ideals of this country.

What kind of impact can Cesar Chavez’s story have on current society?

His impact is felt every day in the fields. Workers have basic rights and accommodations like bathrooms, water, food, shade, etc., as a direct result of the farm workers movement led by Cesar Chavez, Dolores Huerta and the United Farmworkers Union. Moreover, his legacy and that of non-violent protests were mirrored by King, Ghandi and others. Cesar Chavez’s civil rights movement was in the same vein as those of King, which are celebrated and revered extensively today. Their impact went beyond Calif. and was felt throughout every farm region in the country.

Why do you feel it has taken such a long time for a movie of this magnitude to be devoted to Cesar Chavez?

I think for the same reason many Latino-themed films aren’t released or made, and that is the lack of support and funding for such films. Many in the industry want quick money makers, and many biopics regardless of subject are difficult to sell because of the shortsightedness of our society. We want sex and violence in our films. Biopics tend to not attract the average moviegoer. On the other hand, Mexican-American history is experiencing a bit of a revival in light of states like Arizona banning such curricula. Students, educators, administrators and citizens are demanding their narrative be taught in schools to fill the gaps left by the national Anglo-dominant narrative. Today, the community and U.S. as a whole is waking up to the Latino historical narrative and recognizing it as part of the American narrative.

How do you feel the movie will be received?

The film garnered positive reviews and has a solid cast and director in Diego Luna. I think it will do well and sincerely hope all Americans recognize this biopic as a part of their history and American culture.

How important is it to have this type of movie as a teaching tool both in secondary and higher education?

Like many biopics (“The King’s Speech,” “Milk,” etc.) popular attention is brought to an important topic in our history. Many students don’t read and depend on films for information, so films like Cesar Chavez make people, especially young people, stop and think about what the topic is about.  So, these films are important for educators and the populous at large.