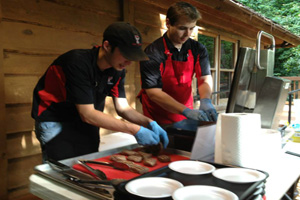 The research also included many students who were involved in every aspect such as preparing the beef samples.

The success of Texas Tech University’s research in meat science and quality is no secret to West Texas or even the state. Now the value of that research is being tasted around the world.

New Zealand’s beef industry recently has been overhauled by research completed through the Department of Animal and Food Science in the College of Agricultural Sciences and Natural Resources.

Miller said on a February morning that year, Australian beef industry executive Rod Polkinghorne literally showed up on the doorstep of the old Animal Science Building.

“He had been to various other American universities, looking for a research partner, and hadn’t found what he wanted,” Miller said. “He read about some of the work we’d done here at Texas Tech, and he just showed up.”

The team assembled by Miller and Polkinghorne has since accomplished nearly 10 years of beef quality research in the Australian beef industry.

Fast forward to 2012, when Silver Fern Farms, the largest beef company in New Zealand approached Rod about doing a big beef quality project for them, mapping out what, if anything they had in their current system that would be acceptable to eat, marketing toward a grass-fed product and consumers who preferred grass-fed,” Miller said.

“They came over and interviewed and visited with me and decided this is where they wanted to work,” Miller said. “We put a contract together, they gave a gift of $2 million, and we did a tremendous amount of consumer research on their beef.”

One of the biggest challenges for the team was lining up consumer groups from other cities.

Be careful what you wish for

Miller’s modest comment “we did a tremendous amount of consumer research on their beef,” is quite the understatement, according to Travis O’Quinn, senior research associate in the department, and stateside coordinator of the project.

“This project was the largest project of its kind ever conducted,” O’Quinn said. “We fed more than 10,000 consumers in the U.S. across 13 different cities. We had very specific numbers we had to meet per session. For example, every night we sampled, we had to have exactly 60 people (three groups of 20) for us to be able to feed. The people we feed are no different than you and I, and all have very busy lives. So from time to time we would have a group show up and be a few people short. We would all have to get on the phone and call wives, friends, and family to try and get the needed numbers.”

Also, O’Quinn said rounding up more than 9,000 people in Lubbock was a challenge. The team was fortunate to have countless groups from the community, including various churches, sports teams and booster clubs come forward to provide the tasters.

“The biggest challenge was probably lining up the consumer groups from the other cities,” he said. “It is one thing to convince people in Lubbock to come out and eat, but it is entirely something different to explain to someone 1,000 miles away what you need.”

But when everything was done and the last consumer was fed, O’Quinn said they were able to take the data and create a grading system that will help the Silver Fern Farms accurately predict the eating satisfaction of each piece of meat they sell.

He added that one of the biggest rewards was accomplishing something of this size and magnitude that had never been attempted before.

“We fed more people in a shorter time than anyone ever could have thought possible. To be able to say you helped make that happen is not something many people get the opportunity to do.” 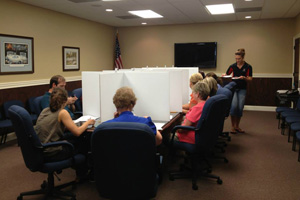 Once all the consumer grading was done, the team was able to take the data and create a grading system that will help Silver Fern Farms.

Like the number of consumers it took to accomplish the study, the research also required the help of an unusually large number of students.

“We had a wide range of students on this project from graduate students to members of our meat judging teams,” O’Quinn said. “They were involved with every aspect, from cutting the steak samples to entering all of the piles of data. Many of them were employed by our department specifically for this project, but many others volunteered their time.”

The students had the opportunity to work with and help communicate to consumers about meat. O’Quinn said often the students had long conversations with consumers before and after the panels, working to debunk many of the myths that surround meat.

“We had countless consumers ask about hormones, antibiotics, grass-fed, and these students worked to help educate them on what was fact and what was just plain fiction,” he said.

Mallory Jones, a senior meat science/business option major from Anson, said it was a privilege to share her knowledge of the meat industry and passion for agriculture with the people she encountered while working on the project.

“Being a student assistant with the Silver Fern Project has been wonderful,” she said. “It allowed me to travel across the country, as well as meet influential people that I might not have met on my own. Also, it gave me even more skills that I will carry with me to my future career.”

The students also learned about conducting research. Many of them hope to pursue graduate degrees at various institutions, and the hands-on research experience they gained through this process cannot be replaced, O’Quinn added.

Taelar Childers, a junior animal science production major from Crandall, helped cook for the consumer panels for each of the four different cooking methods. 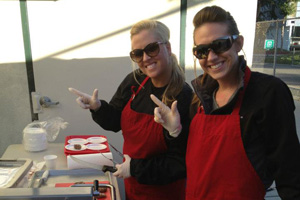 Travis O'Quinn said it was easy to solicit the help of students because of their selfless attitude.

“I helped sort the meat once we received it, set up for consumer panels, worked in the room during panels, shopped for the supplies and helped pack for the trips to various cities,” Childers said. “I think a few of the things I got out of this project would be that I learned how to problem-solve and figure things out last-minute, because on numerous occasions we would have groups cancel on us at the last minute, and because the meat had already been started cooking, we had to come up with the people to feed.

“Also, I learned to pay extreme attention to detail, as each sample has a unique letter and number combination that is important to its identity, so that the data can be properly analyzed later. Each sample number also corresponds to a plate, a ballot and a consumer, so you had to pay close attention to make sure every sample got to the proper place.”

Childers said when Miller first told them about the project, he said it would take one man working 40 hours a week three and a half years to enter all of the data they would need to enter for this project.

O’Quinn said they never had any problem getting students to help with the project.

“It really goes back to the selfless attitude that is promoted in this program,” he said. “Many of these students volunteered countless hours just because they knew we needed the help. There was nothing in it for them; they just wanted to be of help. But the bottom line is we could never have accomplished any of this without the time and effort these students put forth.”