Band is under the direction of Texas Tech School of Music alumni Benjamin Bransford and Casey Elliot. 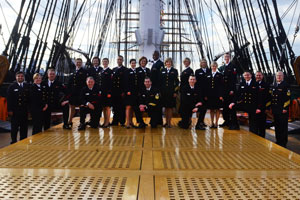 Two Texas Tech University alumni are returning to Lubbock to perform with the United States Navy Band Sea Chanters at 7:30 p.m. March 12 in the Allen Theatre.

The band currently is under the direction of Texas Tech School of Music alumni Benjamin Bransford and Casey Elliot. The ensemble performs music ranging from traditional choral music to opera, Broadway and contemporary music.

The Sea Chanters frequently are found at national events, including inauguration day in 2009. They played at memorials for astronauts of the space shuttle Columbia and the presidential wreath laying ceremony at the United Airlines flight 92 crash site in Shanksville, Pa.

The band also appeared at the Kennedy Center Honors and with the National Symphony Orchestra for “National Memorial Day Concerts” at the U.S. Capitol. They also performed on “Larry King Live,” “CBS This Morning” and at the premiere of the movie “Pearl Harbor.”

For a glimpse of the Sea Chanters, visit the United States Navy Band YouTube channel.

Manuscript Project Up for Popular Award