The short runs at 11:57 p.m. every night during March at 'The Crossroads of the World.' 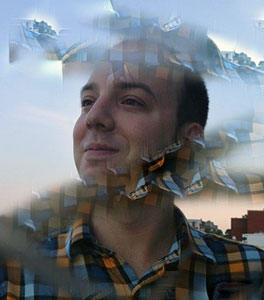 At three minutes to midnight on March 1, his art premiered in one of the most commercialized spots on the planet – Times Square.

And at first glance, passers-by might have thought Texas Tech alumnus Zach Nader's work was just one more car ad flooding the giant screens. However, the initial subject had vanished. The car became a swirling entity comprising the road, streets, hills and mountains sucked into the vacuum where the intended subjects once sped past the camera's lens.

The background, he said, becomes the foreground.

"It’s a fantastic opportunity for me to have my work shown in Times Square, and especially to see this work chosen," Nader said, who now lives in Brooklyn. "It is incredibly exciting to see ‘Optional Features Shown' in such an appropriate venue. Seeing these altered commercials reintroduced into a commercial space that regularly features car advertisements among its many offerings is really the best context possible for this work."

Set to run at 11:57 p.m. every night during March at "The Crossroads of the World" in Midtown Manhattan, the short also will be part of Moving Image, a video, film, and new media art fair that will take place March 6-9 at the Waterfront Tunnel event space in Chelsea.

To make the film, Nader said he used a feature of Adobe Photoshop intended to remove small imperfections. By misusing the tool, remaining parts of the image flood into the place where the car was featured. The flooding of background to replace the specific content is what Nader says interests him the most.

"Several of my works come from a place of intervening in advertisements," he said. "In removing the product, and any text and people, only the background, the situation, the context, is left. I’m interested in what happens when something like a car commercial has the reason it exists removed. What are we left with? This work comprises what I would call the salient parts of many car commercials. The resulting visualities are a reflection on the scripted nature of image creation and editing." 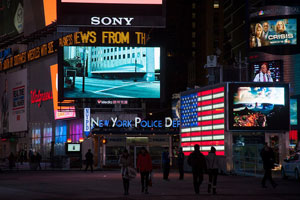 A native of Dallas, Nader received his undergraduate degree from Baylor University before coming to Texas Tech in 2008, earning his master's degree in photography in 2011.

"Texas Tech was incredibly influential on my work," he said. "I started doing the type of appropriation-based work that I make while there. I met lifelong friends and colleagues there. We had amazing visiting artists come through the program, which helped me see what an artistic career could look like outside of an academic setting. Mostly though, I learned the skills to develop my ideas and projects on my own. I had a great time in the School of Art."

Nader said many of the faculty he encountered at Texas Tech helped make him a better artist, including especially Rick Dingus and Robin Germany in the photography area of the School of Art. In particular, he said, Joe Arredondo, director of Landmark Arts and at the SRO Photo Gallery, gave him the skills that continue to be beneficial to him as a professional in New York.

Arredondo said he remembers Nader's conservative photographic style when he first came to graduate school. While Arredondo doesn't teach class, he and Nader would have long complex conversations about photographic theory and image theory when Nader worked as coordinator for the SRO Photo Gallery.

"I see myself as a mentor to him," Arredondo said. "He and I became good friends while he worked in my office and we have stayed in contact since he graduated. There have been several great successes along the way for Zach which I have been excited to hear about. When he made it into First Edition 2012 Hey Hot Shot just one year after arriving in New York that was very exciting. His subsequent successes even more so. 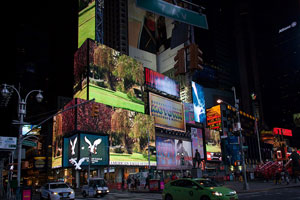 "I like being able to tell current grad students that even if you are from Texas with a Texas Tech art degree, you can end up in New York City with your artwork displayed in Times Square like Zach Nader; a gallery director of one of the first galleries, nearly 20 years ago, in the Williamsburg area of Brooklyn like Daniel Aycock; web and new media manager of The Frick Collection like Vivian Gill; or even editor of Wired Magazine like Scott Dadich."

Midnight Moment premiered in May 2012 and is organized and supported by the Times Square Advertising Coalition in partnership with Times Square Arts, the public art program for the Times Square Alliance, with additional partners of participating sign holders and artists.

"It's exciting for an emerging artist such as Zach Nader who is appropriating new technologies and inventing creative ways to dialogue about consumerism, to have access to the most highly visible and appropriate platform," said Sherry Dobbin, Times Square arts director.

Toby Sturek, chairman of the Times Square Advertising Coalition, said that the signs of Times Square are known all over the world as the best place to display new and exciting advertising content.

"We are delighted to showcase Zach Nader's unique film, which actually removes the products from commercials," Sturek said. "March's Midnight Moment will surely capture the attention and interest of the Times Square shoppers and visitors below."