The series has brought renowned speakers to Texas Tech, with plans for more. 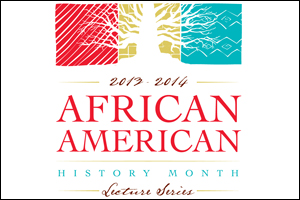 When Karlos Hill first came to work at Texas Tech University, he felt the campus and Lubbock community was missing something.

He had the idea of creating a lecture series to raise appreciation for African-American history.

“The African-American History Month Lecture Series has elevated the awareness of African-American history, contemporary issues and studies on our campus and in our community,” said Lawrence Schovanec, Texas Tech provost. “The distinguished speakers and scholars that have visited Texas Tech campus raised the profile and visibility of the speaker series while also enhancing the intellectual conversation about these important topics.”

The lecture series kicked off in the spring of 2013 with Henry Louis Gates, director of the W.E.B. Du Bois Institute for African and African-American Research at Harvard University, as the inaugural speaker.

To open the 2013-2014 series, James McBride’s discussion was based off his latest novel, “The Good Lord Bird,” a National Book Award winner for fiction. His lecture was intertwined with a concert that told the story of a white American abolitionist, who attacked the largest arsenal of weapons in America in 1859, spurring the start of the Civil War.

Tricia Rose, a professor and chairwoman of African-American Studies at Brown University, discussed the role hip hop plays in the United States and world politics in a lecture called “Hip Hop Wars.”

Koritha Mitchell, associate professor of English at Ohio State University, discussed her latest book, “Living With Lynching: African-American Lynching Plays, Performance and Citizenship, 1880-1930.” She presented the idea that African-American communities survived actual and photographic mob violence through popular lynching plays. A dramatic reading of the one-act play “Safe” was read by Texas Tech students and faculty prior to her lecture.

“The lecture series brings distinguished scholars and public intellectuals to Texas Tech to talk about significant topics, contemporary but also historic regarding the African-American experience,” said Karlos Hill, director of the African-American History Month Lecture Series and assistant professor in the Department of History.

In all, close to 1,000 community members, students, faculty and staff have attended the lecture series events.