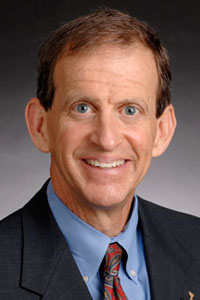 Brian Shannon, the Thornton Professor of Law at Texas Tech University School of Law, has been re-elected to serve a second, two-year term as president of the 1A Faculty Athletics Representatives (1A FAR) association. His new term as president will continue through September 2016.

The 1A FAR is an organization of the faculty athletics representatives at the 125 NCAA Division I institutions in the Football Bowl Subdivision (FBS), formerly known as Division 1A. These schools are from the various FBS conferences including the Big 12, Big 10, ACC, SEC, Pac 12 and others. The mission of the 1A FAR is to advocate for effective interaction and balance between an institution’s academic mission and its intercollegiate athletics program.

“We are proud of Brian, not only for his service to Texas Tech University, but to intercollegiate athletics as a whole,” said M. Duane Nellis, president of Texas Tech. “He is a champion of ensuring the student in student-athlete is well represented on campus, in the Big 12 Conference and nationally. Brian’s dedication to Texas Tech University as a law professor is matched by his integrity and passion for our student-athletes.”

“Brian is a tremendous leader in higher education and intercollegiate athletics,” said Texas Tech Director of Athletics Kirby Hocutt. “With a commitment to student-athlete welfare and comprehensive excellence he continually focuses and leads with the values that are so important in our industry.  Brian is the ideal individual to once again serve as president of the Division 1A Faculty Athletics Representatives.”

In addition to his service as the Texas Tech FAR, Shannon has been a popular classroom teacher at Texas Tech Law since 1988, and has won numerous teaching awards, including the 2013 Chancellor’s Council Distinguished Teaching Award. He also is a board appointee for StarCare Specialty Health System (formerly known as Lubbock Regional MHMR Center), where he has served for more than 20 years and is a past chairman. Shannon is an elected member of the American Law Institute and was the 2008-09 president of the Lubbock Area Bar Association. He also is a past chair of the State Bar of Texas Disability Issues Committee, and Gov. Rick Perry appointed him to four terms on the Texas Governor’s Committee on People with Disabilities from 2003-11.

“I am pleased and honored to continue to serve as president of the 1A FAR for a second term,” Shannon said. “The NCAA and its member institutions have a strong commitment to the collegiate model. This means that we recognize and embrace our student-athletes’ opportunities to develop fully not only on the field or court, but also in the classroom; not only as elite athletes, but also as well-rounded students fully integrated into the full range of campus life; and not only for their contributions as members of an athletic team, but also for their future contributions as citizens.”