When Garrett Heath realized such a product didn't exist, he took matters into his own hands. 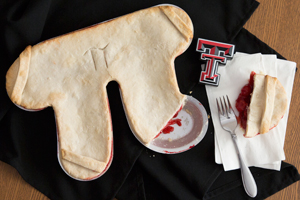 Pi or pie? With today (March 14) being celebrated around the nation as Pi Day, these homophones can be confusing, especially when baking pies is a popular way to celebrate the famous mathematical constant.

A Texas Tech University alumnus decided to combine these words and create something for everyone to enjoy on Pi Day: a Pi Pie Pan, a pan in the shape of the pi symbol designed for baking pies.

“It’s a fun way for people to show off being a little geeky while enjoying to cook,” said Garrett Heath, creator of the pan. “There’s no better way to make a pie on Pi Day than to have a pi-shaped pan.”

He found that there were many pi plates, which used aluminum foil or circular pie pans with 3.14 printed etched on, but there was nothing in the shape of the pi symbol.

“I dusted off some of my Texas Tech AutoCAD inventor skills and made some quick sketches of my ideas, showed some friends and then refined them over time,” Heath said. 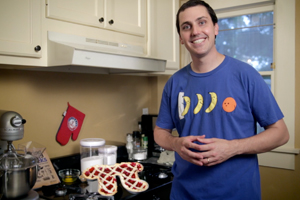 Garrett Heath graduated from Texas Tech in 2004 with a bachelor's degree in industrial engineering and again in 2005 with a master's in the same department.

While working on the Pi Pie Pan, Heath worked at his own start-up company and then changed jobs to work in San Antonio at Rackspace, where he currently works as a content marketer. Heath also maintains a food blog called www.saflavor.com.

In the beginning of the creation process, Heath explained his idea of the pi pan to two friends. They helped with design and manufacturing, while he focused on marketing the product.

When deciding who would want to purchase the Pi Pie Pan, Heath and his business partners thought interest would come from a specific market.

After three years in the creative and manufacturing process, the Pi Pie Pan officially launched in the summer of 2013, so this is the first Pi Day to have an official pi pan to celebrate with.

“I haven’t made a proper pie yet because I usually cook brownies or cornbread in it, but I am definitely going to use the Pi Pie Pan on March 14,” Heath said. “It would be an impossibility to not take advantage of the product.”

To learn more about the product or to order a Pi Pie Pan, visit www.pipiepan.com.

Getting to know Garrett Heath

There’s a strip that starts from the main entrance on Broadway that goes toward Doak Hall where there are the Glenna Goodacre statues. To me, it’s one of the prettiest spots to walk by. It feels old school.

I attended when things were really starting to change on campus. It was cool to be on campus while all of the changes were occurring. Now, I love the network and community of people. It’s nice whenever you bump into someone who went to Texas Tech.

When I was younger, my family would go to football games a lot because we lived in Lubbock. My brother and I were each given $5 and I would always buy a program, because it would always have one of cartoonist Dirk West’s drawings in it. It always had Raider Red with whomever we were playing. I still have a stack of the programs.

The best part about college is that you’re learning on your own and learning how to apply it. Stay active on campus and be involved. Get out of your major and do all sorts of different things.