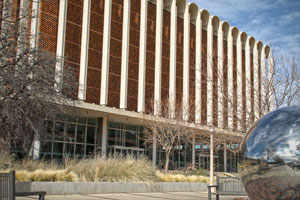 Ryan Litsey, Texas Tech assistant librarian in the document delivery department and director of the project, said the software is an important update for the world of libraries and their patrons.

“Occam’s Reader software allows libraries to meet the digital needs of their patrons by offering the extensive Springer collection of e-books, for the first time, through inter-library sharing,” Litsey said. “By developing an interface that works within libraries’ already implemented ILL program, we believe that the software will provide a seamless integration allowing libraries an efficient and effective tool for addressing the growing trend of reading books electronically.”

The Greater Western Library Alliance, a consortium of 33 academic libraries, developed the idea. Developers at Texas Tech and University of Hawaii-Manoa, both members of the alliance, created the software.

Texas Tech University Library’s partnership with Springer helps provide the Occam’s Reader Project the opportunity to work with a leading, world-wide industry publisher on a new model for libraries, ILL and e-books.