Meanwhile, TTUISD alumnus readies for his final appearance in the Winter Games. 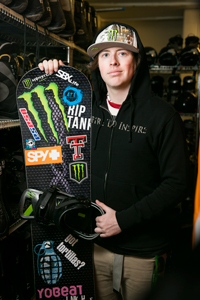 A Texas Tech student plans to hit the slopes and compete against professional snowboarders in the 2022 Winter Olympics, but for this year’s games he plans to watch from a distance.

“I know I can make history by becoming the first Olympic snowboarder from Texas,” Austin Nettleton said. “I plan on making that happen.”

The senior public relations major from Queens City said he began snowboarding at nine years old. His father took him to Ski Apache in Ruidoso, N.M., where he first learned the sport.

“The moment I stepped into those bindings, I fell in love with the sport,” he said. “I didn’t want to give it up, and that’s when my addiction to snowboarding began.”

As Nettleton continued to snowboard, he dreamed of becoming an Olympic snowboarder, but never thought he would have the opportunity to make it a career.

It wasn’t until the spring of 2013 when the doors to his competitive career opened when he registered for the United States of America Snowboard Association Southwest Freeride Series Boardercross Regionals.

In December 2013, Nettleton was given the opportunity to train in Canada with John Shelly, a former International Ski Federation (FIS) World Cup pro snowboarder, who competed for five years with the New Zealand National Snowboard Team. Nettleton also trained with David Hugill, an FIS coach and retired professional freeride snowboarder. Both have coached snowboarders who competed in the Winter Olympics.

Nettleton was never coached in snowboarding before, so he was unsure of what to expect. However, he knew he was training with elite coaches after his first day snowboarding.

“Coach Shelly spent a lot of one-on-one time with me, transforming me from an average snowboarder to a snowboarder who could race and compete at the highest level,” he said. “I literally had to relearn how to snowboard, and it was incredible.”

Nettleton said Shelly told him if he continued to work hard and develop skills at his current pace, it was a possibility for him to compete in the 2022 Winter Olympics.

For now though, Nettleton said he will root for his role model Nate Holland, a U.S. snowboarder competing for his first gold medal.

And in a few years, Nettleton could be competing alongside his role models.

“I take notes and study how the snowboarders race, their form and every detail that would help me,” he said. 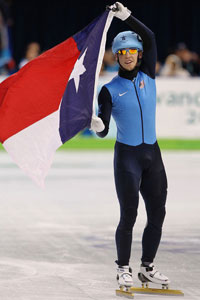 Malone celebrating his bronze medal at the 2010 Vancouver Winter Olympics.

Jordan Malone knows one thing: this will be his final Winter Olympics.

Malone, who graduated from Texas Tech University Independent School District in 2008, will compete in short track speedskating for Team USA. This is his second Olympics, as he helped the 5,000-meter relay team win a bronze medal at the Vancouver Winter Olympics in 2010.

This year, he will once again race on the relay team, as well as the 500-meter individual race. Malone has said this will be his final Olympics, so he's looking forward to one last chance to excel on the world's biggest stage.

“I hadn’t done everything I wanted,” the Denton native told the Dallas Morning News. “I’m hoping this time around I can get an individual medal and medal with my team. The fact that I’m going to the games again just solidifies that it wasn’t a fluke the first time. I needed some more testing of myself.”

TTUISD is an online accreditation program at elementary, middle or high school levels to earn a TTUISD diploma. Malone said he chose TTUISD after hearing about it from friends. The distance-education program offered Malone the flexibility and convenience he needed as a full-time athlete and student. He graduated in November 2008.

Getting to Know Austin Nettleton

It is a three-way tie with my trip to Breckenridge, Colo., with Texas Tech Ski and Snowboard Club during the 2013 winter break; when Josh Abbott sang “Fight, Raiders Fight” at Jones AT&T Stadium; and when I led the men’s basketball team onto the court during a game in spring 2013.

The College of Media & Communications building.

Throwing tortillas during football games, the Raider Power chant and the Masked Rider leading the football team onto the field.

The sense of family I have here. Every time there’s a football game on, I log on Twitter and see fellow Red Raiders cheering on our sports teams, no matter the score. Everyone cheers each other on no matter what they’re going through.

My Texas Tech American flag. It is hanging up in my apartment, so it is the first thing anyone sees when they walk in.