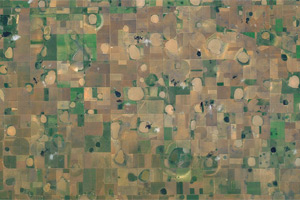 Aerial photo of a portion of Floyd County. The playas are the color of chocolate milk because of all of the sediments in them.

Using a mountain of satellite photographic data and decades of waterfowl counts, a Texas Tech University biologist said she and others have found a correlation with the amount of waterfowl and the amount of wetlands available across the plains from Canada to Texas.

More wetlands meaning more waterfowl may sound like a no-brainer, but researchers were able to land at conclusion using macrosystems ecology said Nancy McIntyre, a professor of biological sciences and curator of birds at the Natural Science Research Laboratory.

The research appeared in a special edition of the peer-reviewed journal, Frontiers in Ecology and the Environment, dedicated to macrosystems ecology.

“The novelty of what we’re doing is in taking the weather data from the past to be able to say certain types of precipitation conditions led to X amount of available wetlands, which was associated with Y number of birds,” McIntyre said. “If future climate scenarios say we should get fewer but more extreme precipitation events, then we can estimate how many wetlands and birds will be around in the future, so long as no more wetlands are converted into farm use or turned into neighborhoods. That’s work in progress. It sounds straightforward, but it has never been done because of the complexity and the massive amount of data used here.”

Macrosystems ecology is a new and emerging science using large amounts of information that are analyzed by faster and smarter computers to not only create greater understanding of how habitats interact, but also make better predictions about how these systems may react in the face of global climate change, she said.

“A change in the number of wetlands available can cascade in to the variety and numbers of birds, as well as amphibians, dragonflies and a number of other animals,” McIntyre said. “In the United States, we’ve lost about 50 percent of the nation’s original wetlands in the past 200 years. The losses are particularly bad in the Great Plains, where about 98 percent of the wetlands have disappeared since 1986. With climate change on the horizon, we’re trying to understand how these wetlands and the animals that use them interact.” 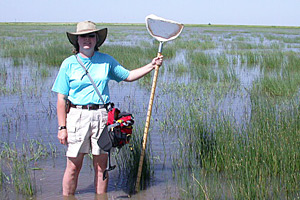 Nancy McIntyre in a playa wetland in Briscoe County.

The research was part of a $1.6 million grant from the National Science Foundation. McIntyre and others looked at freshwater wetlands across the Great Plains from the prairie potholes carved by glacial activity in the north, through the Rainwater Basin of Nebraska down to the playa lakes of the South Plains.

“They call it the duck factory of the world,” McIntyre said. “Most of the ducks breed up there and overwinter down here. But there are about 300 species of regularly occurring, breeding land birds in the Great Plains, many of which use these wetlands.”

Researchers studied photos from satellites that passed over the same area of land every 16 days, she said. Scientists compared photos over a 13,225-square-mile area to see how many wetlands were full, how many were dry, how and when they would fill with water, how long they would retain water and the impact the lack of wetlands had during dry spells.

McIntyre said scientists also looked at connectivity, which is the ability of an animal to move through the network of wetlands.

“In the past, if all the playas were wet, an animal only needed to be able to move around two to four miles to get from wetland to wetland, she said. “Given that all playas are not wet due to drought and to land conversion, we found that even in best-case scenarios an animal effectively had to double the distance it could travel before it found water, and in some cases it was more than eight times as far. That’s because wet playas are sparse due to drought cycles and playa losses due to land conversion. Playas will become even sparser in projected futures.”

Katharine Hayhoe, co-investigator and a director of the Climate Science Center at Texas Tech, said her results showed a marked tendency toward increased drought in the future, even in places where researchers don’t expect to see climate change significantly altering the average precipitation.

“This will impact many aspects of life in the Great Plains, including the wildlife and migratory birds that depend on the playa lake network,” she said. “Today, any ecological study of a system or species that is sensitive to temperature, precipitation, or other aspects of climate, and which attempts to address the long-term sustainability or health of this system over decades, must take into account climate change or risk ending up with the wrong answer.”