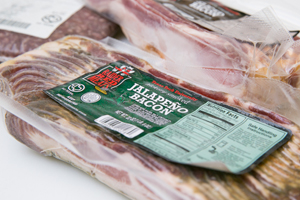 Started in 1972 by sisters Ellen Stanley, a teacher from Lubbock, and Mary Lynne Rave of Beaufort, N.C., the purpose of National Pig Day on March 1, according to Rave is “to accord the pig its rightful, though generally unrecognized, place as one of man's most intellectual and domesticated animals.”

The question of whether the holiday is a time to honor pigs or to appreciate their mealtime offerings (spare ribs, sausage, bacon and ham) is up for discussion.

At Texas Tech, it goes both ways, as the sale of pork products plays an important role in funding various programs in the Department of Animal and Food Science.

When Raider Red Meats debuted its blueberry sausage in 2008, it was a fairly novel item. Nearly six years later the healthier breakfast meat is in the top three best-selling items on the Raider Red Meats menu and is available in dozens of grocery stores.

However, bacon is unarguably king of morning mealtime. According to Corliss, the number one and two sellers are jalapeño bacon and hickory-smoked bacon, respectively. Peppered bacon also is available.

“We sell about 75 pounds of the sausage a month, as opposed to about 200 pounds per week of just the jalapeño bacon,” Corliss said. 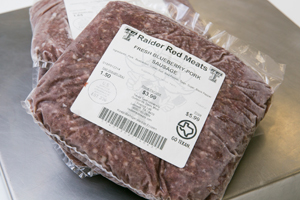 While the blueberry sausage product was developed for its healthy properties – blueberries are a great source of antioxidants – the hottest selling bacon was developed just as a fun flavor and to have something unique, Corliss said.

“The jalapeño bacon was rolled out in about 2010, so it hasn’t been on the market nearly as long as the sausage,” he said. “But anything ‘bacon’ is going to sell well these days.”

The pork products are available at COWamongus in the Animal Science Building and at 36 locations of United Supermarkets, including all of the Lubbock stores.

However, Corliss said, not all of the products’ fans are local.

“Our alumni take good care of us, as far as buying our product,” he said. “I got a call one day from an alumnus in the Dallas area, thanking me for stocking the jalapeño bacon at the new United location in Dallas. He was truly excited!”