Katie Pfister is working as an intern with Paramount Pictures and the Dr. Phil Show. 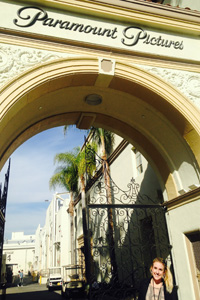 Pfister traveled to Hollywood for her internship at Paramount Pictures.

Known as the entertainment capital of the world, Hollywood is where dreams are made. For a recent Texas Tech University graduate, America’s oldest running movie studio is where her dream started.

Katie Pfister, public relations alumna from the College of Media and Communication, left Lubbock shortly after graduating in December and ventured to California for an internship with Paramount Pictures.

“I’ve always been interested in the entertainment industry and when I heard about this internship with Paramount Studios, I knew I had to apply,” Pfister said. “I sent in my application and resume, then got an interview that led me to getting hired.”

Founded in 1912, Paramount Pictures is a global producer and distributor of film and television entertainment. It has produced blockbuster hits such as “Titanic,” “Indiana Jones” and “Grease,” as well as produced hit television shows such as “Cheers,” “Frasier” and “Criminal Minds.”

Pfister is working with one of the seven production teams for the Dr. Phil show, which in its 12th season, is the number one daytime television show. Some of her behind-the-scene duties include researching, coding and making accommodations for guests on the show.

“Basically, I find people with interesting stories by reading through plugs sent to our website, as well as my own outside research,” Pfister said. “Once an idea is nailed down, I do more research about that specific topic and find the right story with different angles that would be good for the show.”

Pfister does more than office work; she also gets hands-on set experience.

“I get the guests to wardrobe, hair and makeup and then prep them before showtime to calm their nerves and reiterate what they need to talk about,” she said. “After that, I get to watch the live taping of the show and that’s my favorite part of the job because it’s really exciting to see all the work we have done as a team come together.”

Pfister also gets to have a round-table discussion with Dr. Phil McGraw and the rest of the production team and help plan for upcoming shows.

“I don’t think a lot of people know how much actually goes into producing a television show of this magnitude,” Pfister said. “It is fast-paced, exciting and a lot of hard work all at the same time.”

Pfister is thankful for everything she has gained from this experience and is ready to enter the workforce after her internship ends this spring.

“I never would be where I am right now to follow my dreams if it weren’t for the professors at Texas Tech that prepared me for life after college or my parents who have supported me through it all,” she said.

Getting to Know Katie Pfister

Running into other Texas Tech alumni all over the state of Texas.

Take advantage of every resource and opportunity available to you.