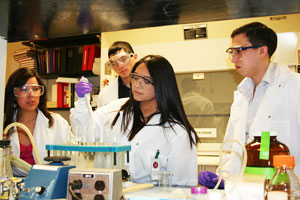 “The Plains Bridges to the Baccalaureate Program is essentially the same but will continue to impact the lives of underrepresented minority students at the community college level,” said Cañas-Carrell, who serves as program director.  “The program still aims to increase the number of underrepresented students in biomedical and behavioral sciences. We’ve just recruited our fifth class of 12 students that will start our program in the spring. We want them to go to South Plains College, come to get their bachelor’s degrees at Texas Tech, and then hopefully continue on to graduate school.”

Cañas-Carrell said institutes for higher education must develop programs to help minority students overcome the challenges they face in pursuing university degrees – especially in the sciences.

According to the National Science Foundation, enrollment of U.S. minority citizens and permanent residents in graduate science and engineering programs grew from approximately 13 percent in 1989 to approximately 24 percent in 2009. However, despite this growth, in 2009, only 7.8 percent of U.S. citizens and permanent residents pursuing graduate science and engineering degrees were black and 7.1 percent were Hispanic. 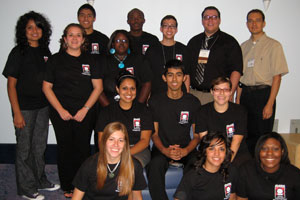 In the past 5 years, 55 students have gone through Texas Tech’s outreach program. Of that number, 71 percent have transferred, which is almost twice the standard South Plains College transfer rate of 39.5 percent. Transfer rates at Texas community colleges figure in at about 36.4 percent, and the national transfer average is 29 percent.

Of those who transferred, 81 percent still major in a science-related field and 31 percent completed their Bachelor’s of Science degrees.

Chancellor Kent Hance, who recently bestowed one of his Chancellor’s Council Distinguished Research Awards to Cañas-Carrell, said programs such as the Plains Bridges to the Baccalaureate Program help to grow Texas Tech’s enrollment.

“Since 2006, minority enrollment across the Texas Tech University System has increased 70 percent,” Hance said. “That’s because of programs like this and people like Dr. Cañas-Carrell. We are proud of Dr. Cañas-Carrell and her team’s efforts to foster diversity in higher education and at Texas Tech.”

Cañas-Carrell said she hopes to encourage more minority students to pursue more science-based graduate degrees. They hope to have 48 students pass through the program in the next five years. The first 12 students in the program will begin this fall at South Plains College.

“The continuation of this program would not be possible without our federal funding,” she said.

The program originally was funded by the NIH with a $1.08 million grant in 2008.

“We are thrilled that this grant has been renewed because we feel it is very important to help students from underrepresented groups, especially those in the science fields, to succeed in college,” said Texas Tech President M. Duane Nellis. “We want them to leave Texas Tech ready to pursue careers in science, and feel this training is crucial to keeping Texas and the U.S. competitive in the future.”