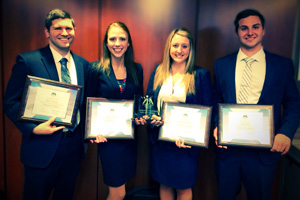 The team behind this most recent win, comprising second-year law students Drew Thomas of Madison, Wis.; Taylor Stoehner of Flower Mound; Delaney Crocker of Lubbock; and Caleb Miller of Fresno, Calif., went undefeated at both the regional competition in California last November and at the national championship in Chicago. Their win marks the law school’s fourth national title at this competition since the 2007 academic year.

“The competing teams in the national round were equally matched in terms of intelligence; we just outworked them,” Thomas said. “Our coaches, Shery Kime-Goodwin and Dick Baker, worked three days a week collaborating, honing and refining our advocacy skills.”

“Though the team and our coaches sacrificed precious free time for preparation, including weekends and holidays, it all became worth it the moment the ABA announced our names as the national champions,” Miller said. “It was an emotional experience for all of us that I would not trade for the world.”