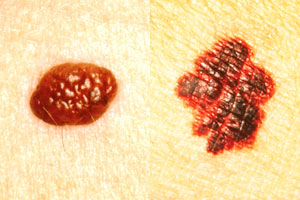 Some people who find a suspicious mole on their skin may wonder if it’s skin cancer, yet wait around not seeking medical advice. A researcher at Texas Tech University is collaborating with researchers at the University of Utah to crowdsource pictures of atypical moles, in hopes of getting people to see a doctor sooner.

Andy King, an assistant professor in the Department of Public Relations in Texas Tech’s College of Media & Communication, authored the study of work tied to a project begun when he was a doctoral student at Purdue University. It was a pre-doctoral fellowship with the NIH studying cancer prevention that brought him together there with Jakob Jensen, now at the University of Utah, who was developing a variety of cancer prevention projects related to breast cancer, colorectal cancer and skin cancer.

One of the topics addressed in the study was secondary prevention, or early enough detection that the cancer can be treated effectively.

King’s key interests are in visual persuasion and visual messaging strategies. The project was examining this in the context of skin cancer.

“Jake came up with idea to include some type of crowdsourcing dimension in an intervention in the future,” King said. “We could do some preliminary testing with the data we had for that study.”

King also studies popular perceptions of science and health news. He said part of what came up was people misunderstanding what they were doing with the crowdsourcing study.

“People would comment, ‘This shouldn’t substitute for people going to see their doctors!’” King said. “We don’t think so either. We see this as research that will be useful in determining what components are included in an intervention in the future. We believe this crowdsourcing component will allow people to have additional information for making the decision whether to see a doctor. It’s a resource for people to make more informed decisions. In the end, it’s up to them and their doctor. This does not substitute for any professional medical advice.” 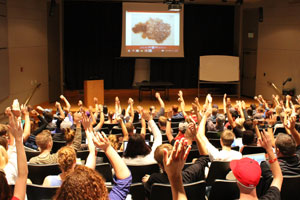 King said the preliminary research shows that going to the crowd is better than going to perhaps a family member for advice.

“Asking the crowd for an opinion seems to be more effective than asking your Aunt June what she thinks of your mole—unless she’s your dermatologist,” King said. “From past research, we know that lay people are OK at this. What the initial research shows is that a crowd is going to be better than an individual at this specific identification task.”

The research method was not a test of a certain application to do the crowdsourcing. It was a test to see if theoretically this sort of crowdsourcing for making this judgment on this task makes sense. King said it was a test of analyzing collective decision making.

King said the next step is to incorporate the crowdsourcing into an intervention at some point.

“It could take a lot of forms,” he said. “We have talked about developing some kind of app or online interface where people can upload an image, then a crowd of people – interested others – could look at it. That process would mirror what we’ve done for data collection for this paper, but would actually occur online.”

Are You Getting the Message? Research Lab Aims to Improve Communication