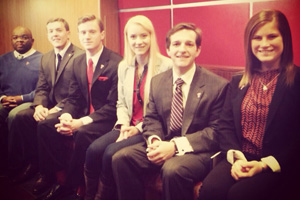 Currently in its 21st year on the road, the bus is conducting a winter tour of universities in the Big 12 Conference.  Originally scheduled as a video interview, the students gave questions by telephone due to technical difficulties.

Lauren Dent, the academic advisor for political science and global studies, said the department hand-picked the students involved after asking political science professors for their best and brightest students.

“They’re all interested in careers in politics, and they have really bright futures,” Dent said. “This was a first step into that for some of them. It gave them a taste of real-world news and politics, so I’m excited they got that opportunity. I wish more students could have that.”

After receiving some mentoring from assistant professor Robert Forbis, who had met Chaffetz personally during his 19 years as a resident of Utah, the students asked Chaffetz questions about a range of topics, including Obamacare, student loans and federal research spending priorities.

Lavis, who co-hosts political radio show, “ Devil's Advocate ,” on KTXT-FM, said she wasn’t nervous before her question and felt this scenario was much like the political conversation she conducts on the show.  However, the director had her nix her signature joke.

“The director told me I must go straight to the question, which was disappointing because I wanted to prove Texas Tech has a sense of humor,” she said. “Nevertheless, I took a deep breath and moved forth with my question. I asked why a young, healthy adult such as myself would enroll in Obamacare after recent comments from insurance companies such as Aetna stated that the lack of young, healthy adult enrollment would cause higher premium charges or perhaps even cause them to pull out of the Affordable Care Act entirely. My question was not necessarily partisan but more predicated on the fear young adults have about the new healthcare mandate.” 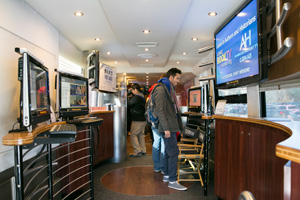 “In my opinion my question worked out well because Rep. Chaffetz touched on the topic of wanting to increase the education level of individuals and move them out of the sphere of minimum wage careers in his opening remarks,” she said. “My question was about what kinds of reforms we should expect to see as a result of this student loan balloon situation, with the added factor that the cost of attending a public university is only continuing to rise. I have actually not had an opportunity to see his response yet.”

Brannan said she enjoyed the experience of asking a representative a question that I think is weighing on a lot of parents’ and students’ minds, especially as the nation recovers from the recession.

“I was given an opportunity to speak on behalf of the students of my university, as well as students elsewhere, and I wanted to use that opportunity to the best of my ability,” she said. “It was also a great learning experience from a public speaking standpoint.”

Lavis said the experience gave her an insight into the media-political relationship that she finds fascinating.

“I was happy to meet other political science students who share a passion for public service as well,” she said. “However, most importantly, it once again just proved to me that Texas Tech has given me opportunities to be something in this world, and I am immensely grateful.”

Texas Tech Panel to Discuss War on Terror, Government Surveillance and the Constitution for ‘Constitution Day’