Texas Tech University’s meat, wool and livestock judging teams once again proved that Texas Tech’s judging program is one of the most consistent and competitive in the nation at the recent National Western Stock Show held in Denver.

“I am proud of the consistency we have developed in our judging program here at Tech,” said Professor Mark Miller, the San Antonio Stock Show & Rodeo Distinguished Chair in Meat Science.  “Each team has a competitive spirit that drives them to excellence.” 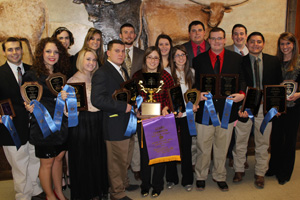 The Meat Judging Team began its season with a 13-point victory, posting a total team score of 4,076 points. The team won the pork judging, specifications and placing divisions.

The team is coached by graduate students Drew Cashman and Loni Woolley and Travis O’Quinn, a post-doctoral research associate, along with Miller. 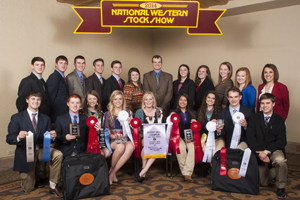 The Wool Judging Team finished a consistent second and third with its two teams in Denver behind Texas A&M University. They also had the top three individuals in both the reasons and placing divisions.

The team is coached by Aaron Jennings, an instructor in the department, and undergraduates Reggie Halfmann and Colton Fritz. 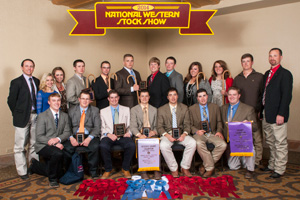 The Livestock Judging Team began its spring with first and second place finishes. The team won the Collegiate Carload contest – a contest unique to the National Western Stock Show where the participants evaluate pens of cattle. The team finished second behind Oklahoma State in the livestock judging contest where they evaluated cattle, sheep, goats and swine and presented oral reasons.

Individually, Hayden Brown, a junior from Midland, was third in the Carload Contest, and Ian Schaefer, a junior from Garden City, ranked sixth overall in the livestock judging contest.