Researchers will have more ability to perform research related to biological pathogens and toxins. 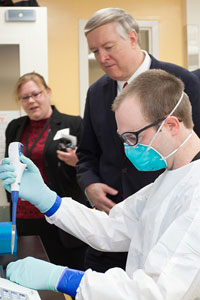 The biological safety level three (BSL-3) laboratory will provide new opportunities for Texas Tech researchers by giving scientists the ability to perform both basic and applied research related to biological pathogens and toxins that impact human and animal health.

“The BSL-3 facility has the potential to improve and expand the capabilities and scope of human and animal health related research at Texas Tech” said Steve Presley, laboratory director.

The 1,600-square-foot facility also allows Texas Tech researchers to expand their scope and be more competitive when pursuing research grants to study disease pathogens affecting public health. The City of Lubbock Health Department had a similar facility for years, and when the city decided to discontinue the facility, city officials contacted Texas Tech.

“Texas Tech was able to utilize existing laboratory equipment and resources in the new facility,” said Presley. “Most importantly to Texas Tech is that we’ve expanded on what the city was doing by introducing a research component to the BSL-3.”