Lakeiva Council is scheduled to graduate with two bachelors degrees and a masters. 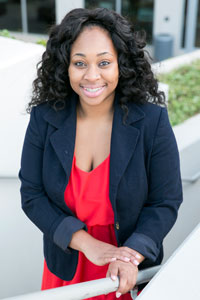 Council, a senior from Houston, is a single mother to a two-year-old boy, but still is involved in various organizations and holds leadership positions on campus. Most importantly she is scheduled to graduate with three degrees – a bachelor’s and masters in accounting and a bachelor’s in energy commerce – May 2015.

“I have a lot to learn but I am proud of where I am and how far I’ve come,” Council said. “I have been taught so many life lessons through the good and bad, and each day I am becoming a stronger mother, sister, friend and mentor. I am proud of what I do but I get more joy out of watching others achieve their goals no matter what obstacles they overcome.”

Council became pregnant in 2010 during her junior year, and she said the situation was difficult because all eyes were focused on her. Fellow students stared, made up stories and judged her.

“I thought I let everybody down. Everyone had such high expectations,” she said, “I felt just so many emotions. There is a stigma behind being pregnant in a college atmosphere.”

Despite her situation, Council worked two jobs and was enrolled as a full-time student. She received help from various members of the Texas Tech family, but she said she learned a lot on her own.

She credits Cory Powell, who is the director of Texas Tech’s Mentor Tech program, for connecting her with a previous student who was once in Council’s position.

In the summer of 2011 Council gave birth to her son Landon and returned to Texas Tech in the fall.

“I still wanted to complete my goal of finishing school,” she said. “My goal has always been to become a CPA.”

Council said the Workforce Solutions program at Texas Tech helped her make the transition back to school as a mother. She wants other student mothers to know that no matter how difficult you life may seem, there is always someone on campus you can talk to.

“I’m very grateful for the friends and people I have met at Texas Tech,” she said. “When I first got here I received a mock class ring, and I just recently received the official class ring. It helps to remind me that I have achieved my goals.”

Getting to Know
Lakeiva Council

My friends and the people I’ve met.

I chose Texas Tech on a whim because my best friend came here for engineering.

Is there a professor or someone who has helped make this a memorable experience?

Quepha Lynn because when I was pregnant she wrote my letter of recommendation to the master’s program.

Probably the football games — the atmosphere of all the students getting together.

I love representing Texas Tech and showing other people what Texas Tech is all about.