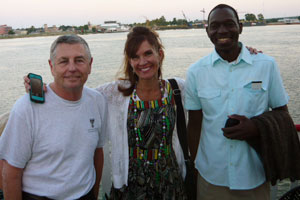 With growing oil and natural gas industries in Africa, engineering companies recognized potential for development, but found one problem: lack of native experts who can work in the field.

When a Texas Tech University professor was approached and asked to educate native African students, he decided he could do something to make a difference.

“It became obvious to the oil companies that there was a natural gas play in the Mozambique Channel between East Africa and Madagascar,” the petroleum engineering professor said.

The companies need native talent, but with no existing petroleum engineering program in the area, they couldn’t find experts on the subject.

With faculty from other universities, Heinze created a one-year introduction course in engineering as well as an additional two years with a focus on petroleum to receive a master’s degree. The program began in the spring of 2013 and students currently are finishing the leveling preliminary courses.

Heinze taught 22 students during a summer class. He taught the class from a distance in Lubbock and Houston using the Microsoft Lync system. After teaching the course for two weeks, he flew to Mozambique and taught for a month. Now, Heinze is developing two drilling courses for distance delivery from Texas Tech, the second course begins February until July 2014. 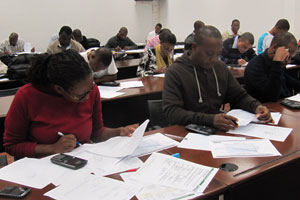 Lync was beneficial for the students taking Heinze’s course because they could watch the lecture multiple times. He said the material is being taught in English, while Portuguese is the student’s native language. With the system, students could listen to something again to better understand the information.

“To me, it’s exciting, and it’s an opportunity to spend extra time helping establish something that a country needs,” he said. “When you get to a poorer country, the opportunity for higher education is slim. The opportunity for a country to have enough experts and well-paid engineers can help boost their economy.”

While abroad, Heinze helped build a rheology lab, or mud lab, which coincided with the building of another rheology lab at Texas Tech in the new Petroleum Engineering Building. Many of the things Heinze did while teaching there followed his curriculum in Lubbock.

One thing Heinze took advantage of was sightseeing. He visited Kruger National Park in South Africa where he saw a variety of wildlife.

“Things we would see here in a zoo, I saw in the animal’s natural habitat,” Heinze said. “Someone made us slow down and we saw two leopards that were lying in the grass, but you had to look closely to see them because they were so well camouflaged.”

Heinze said he may return to the university in the summer to teach more courses to students and help faculty there continue the program.

“Getting to see the faces of the relatively young engineers and also the faculty that taught there was great,” he said. “It was fun for me to see how much they enjoyed learning and picking up a new and different technology.”

Live Look at the Future of Petroleum Engineering