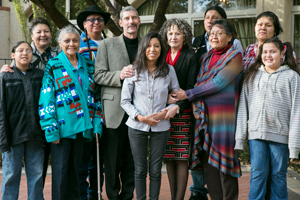 Michaela Red Cherries, center, with both her biological and adoptive family.

Typical graduation attire includes a cap, gown and tassel, but Michaela Red Cherries will stray from the norm: handcrafted moccasins and a feather plume representing her Native American culture will embellish her cap and gown as she walks across the stage.

Michaela will graduate Friday with bachelor’s degrees in history and sociology. She is one of more than 2,300 students graduating this weekend, and she considers her education and college diploma a product of her hope for the future of Native American communities.

Michaela, a first-generation college student, is recognized as the first ambassador who will serve as a liaison between Texas Tech and Native American communities. She became involved in the program when she read TechAnnounce and learned there was an open position for a counselor for the Native American Summer Bridge Institute camp. 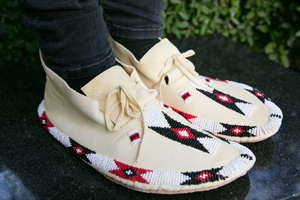 A closer look at Michaela's moccasins, which were handcrafted by her mother.

“My people and nation inspire me,” Michaela said, “I believe my compassion will help me become an ambassador for Native American students because I consider Native Americans my family.”

Pride in Her Culture

She was born into the Northern Cheyenne Tribe in Montana and at three-days old was given up for adoption because her mother wanted her to have more opportunities. Michaela said she was adopted by a loving, generous family in Edgewood, Texas, but continued to remain close to her biological family.

When it came time to decide which college to attend, Michaela followed in the footsteps of her adoptive father, who graduated from Texas Tech in 1981 with a bachelor’s degree in marketing. Both her biological and adopted families will be in attendance Friday afternoon when Michaela graduates with her two degrees.

“As a first-generation college graduate, I consider myself incredibly lucky to have the opportunity to attend Texas Tech,” Michaela said. “My native family is close to my adoptive family, so it will be nice to have them together and visit with each other for the holiday season. Any time together is a blessing.”

Michaela’s biological family will travel to Texas for the first time and will arrive with beaded, handcrafted moccasins for her to wear when she walks across the stage. In addition to the plume, she will wear an eagle feather in her hair. 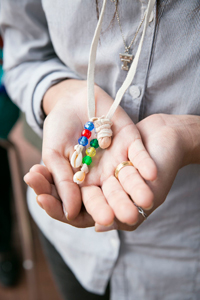 Michaela's Native American father also made her this necklace.

Michaela said she is proud to wear the items that represent her Native American culture. She said she takes advantage of any opportunity that highlights her ethnicity and background, and by doing so, she makes her nation proud.

“I am Native American and I am very proud and thankful that I am,” she said. “When I wear my moccasins, I hope to send a message to all Texas Tech students that are Native Americans. Despite adversity, we can graduate and succeed in a future that was once dim, but is now obtainable.”

“I hope to give back to Native America with my education through a career in law and politics and encourage them that anything is possible for Native Americans nationwide,” Michaela said. “I hope to provide positive change for my people.”

Getting to Know Michaela
Red Cherries 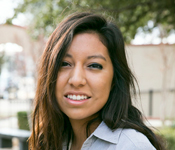 The relationships I made over the past two years. I met great professors, mentors and friends, and the Chancellor Hance has been very instrumental to my success. I also had the opportunity to meet privately with the chancellor. He has opened the doors for me that were once closed. He is a great chancellor and has progressed Texas Tech far into the future. Because of him, Texas Tech’s future is greater.

Is there a professor or someone on who helped make this a memorable experience?

Paul Bjerk, Saad Abi-Hamad, Erica Morin, Melanie Wilson, Chancellor Hance and Linda Kaye Larrabee were encouraging and supportive as professors and mentors during my time in and out of the classroom.

The stacks of the library. I also enjoyed going to the Robert H. Ewalt Student Recreation Center to play basketball.

The Masked Rider, especially at the beginning of football games.