The former president of South Africa is remembered for disabling the legacy of apartheid. 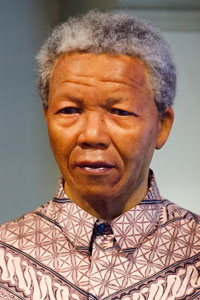 Nelson Mandela, who served as president of South Africa from 1994 to 1999, died today (Dec. 5) at the age of 95. His presidency is remembered for disabling the legacy of apartheid in South Africa.

Tibor P. Nagy Jr., vice provost for international affairs at Texas Tech University, was ambassador to Ethiopia from 1999-2002 and Guinea from 1996-1999. Among his many other posts, Nagy served the Foreign Service in Togo, Cameroon, Nigeria, Zambia and Zimbabwe, and visited South Africa, where he saw the horrors of apartheid firsthand. He also served in Washington, D.C., as the systems administrator for the African Bureau.

“It’s difficult for Americans to truly understand what Nelson Mandela means to Africa and to the developing world,” Nagy said. “This quiet, good-humored, gentle, modest giant endured so much suffering for the simple concept that race does not make one superior to another. After spending so much of his life in prison for what he believed, when the evil regime that imprisoned him crumbled, instead of emerging angry and intent on revenge, he became a force for peace, unity, forgiveness and moving forward.

“In our context, we can best characterize him as part George Washington, part Abraham Lincoln, and part Martin Luther King Jr. His presidency gave South Africa a chance to become a global model for development and racial harmony. Sadly, his successors to the presidency are squandering the tremendous goodwill Mandela created for South Africa. Regardless of what they do, or how South Africa goes, his own light will continue to brighten, immaterial of his mortality.”