The 55th annual celebration was moved to Tuesday in order to support students’ academic success. 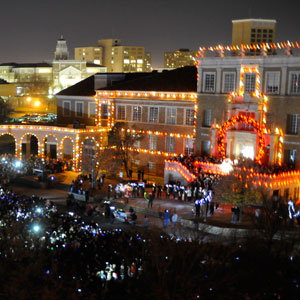 The outdoor ceremony begins with the carillon concert at 6:30 p.m. on Tuesday Dec. 3. in the Science Quad and Memorial Circle.

On Dec. 3 Texas Tech University will host the 55th annual Carol of Lights celebration “55 Years of Magical Memories.” The outdoor ceremony, in the Science Quad and Memorial Circle, will begin with the carillon concert at 6:30 p.m. and will be followed by the ceremony at 7 p.m.

Due to Thanksgiving being later in the month of November and final exams starting the week after Thanksgiving, Carol of Lights has been moved from Friday to Tuesday in order to support students’ academic success.

The Residence Halls Association (RHA) sponsors Carol of Lights, which began in 1956. The ceremony now draws nearly 20,000 students, faculty, staff, and local residents as the Texas Tech choirs, Masked Rider and Raider Red help celebrate the ceremony. More than 25,000 red, white and orange lights illuminate the Texas Tech campus at the end of the annual ceremony and stay lit through the holiday season.

As Texas Tech and the RHA continue their commitment to sustainability, nearly all of this year’s lights will be transitioned to LED bulbs, which is projected to reduce energy consumption by 87 percent.

Immediately following the Carol of Lights ceremony, the Texas Tech School of Music will hold its annual Carols Concert in Hemmle Recital Hall beginning at 8 p.m.

This year, Carol of Lights will be broadcasted live for audiences far and wide. Through a Google+ Hangout on Air, anyone can view a live stream of the event, processional and concert from a number of different angles starting at 6:30 p.m. In addition, a Twitter timeline to experience others' reactions will run along side the broadcast. To view, click here.

Video: Behind the Scenes at Carol of Lights