Political science class conducted a telephone survey on a variety of political issues. 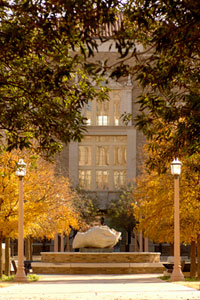 Texas Tech University students found 57 percent of people in Lubbock disapprove of the way Lubbock Power & Light (LP&L) is handling its job to provide electricity to its customers in Lubbock.

For a public opinion course assignment, students conducted a scientific telephone survey of 217 people in Lubbock County on topics such as contentment with LP&L, satisfaction with Lubbock city services, tradeoffs between raising taxes and reducing services, and approval of the Texas governor and United States president.

Students found 71 percent of people surveyed said LP&L pricing was fair or poor while only 3 percent considered it good or excellent.

“The purpose of the survey was to give our students experience with the nuts and bolts of public opinion surveys so they have a better understanding when they see them reported in the news,” said Gregg Murray, associate professor of political science who instructs the public opinion class that made the calls for the survey. “We also wanted to give back to Lubbock by providing information to the community about people’s satisfaction with local government services, and with a few exceptions, people seem pretty satisfied.”

The survey also found that if the local government had to choose between increasing taxes or reducing services, 59 percent of people said they are willing to pay higher taxes to maintain the current level of public services rather than reduce the level of services to avoid a tax increase.

Students in the Murray’s class were assigned 12 hours of surveying. Students from a judicial process class taught by Mark McKenzie, associate professor of political science, also participated. All calls were made from the Earl Survey Research Laboratory (ESRL).

ERSL is a custom research facility housed in the Department of Political Science at Texas Tech. The mission of the laboratory is to provide comprehensive, high-quality survey research services to the university, public sector agencies and organizations, and the public.

Adults 18 years and older in Lubbock County were interviewed from Oct. 15 to Nov. 4. The respondents were selecting using a list-assisted random digit dialing (RDD) sample, which is generated and cleaned using existing telephone lists. The same is composed of both land-lines (34 percent) and mobile telephones (66 percent).

There are 217 completed surveys. The margin of error is +/- 8.8 percent. This means that in 95 out of every 100 samples of the same size and type, the results would vary by no more than +/- 8.8 percentage points from the result gotten if we interviewed every member of the population. Thus, the chances are high (95 out of 100) that any sample drawn, including this one, will show results that will be within 8.8 points of the true value.