Researchers will study how parasitic worms may be impacting the game bird’s recent decline. 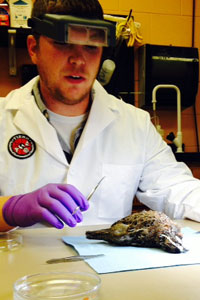 Researchers study parasitic worms and their effect on quail population.

Researchers at The Institute of Environmental and Human Health (TIEHH) at Texas Tech University recently received a $706,000 grant from The Rolling Plains Quail Research Foundation to study how parasitic worms may be impacting the game bird’s recent precipitous decline on the Texas Plains.

The research is part of “Phase 3” of Operation Idiopathic Decline – the largest, most comprehensive disease and contaminant research study ever conducted on quail populations. The total grant of $781,000 funds a project titled “Treatment of Eyeworms and Cecal Worms in Bobwhites: Clinical and Field Studies,” led by Ron Kendall, a professor of environmental toxicology at TIEHH.

“This grant will facilitate increased research on the impact of eye worms and cecal worms on wild bobwhite quail,” Kendall said. “We are extremely interested in these parasitic worms that we have found infecting wild quail in the Rolling Plains of West Texas. The foundation has reached out to us not only to increase our knowledge of the impact of these parasites on quail, but also to begin to work on strategies for a remedy.”

The project will involve scientists from TIEHH, Texas A&M University-Kingsville and the Rolling Plains Quail Research Ranch. The research area includes 25 counties across Texas and 10 counties in Oklahoma. 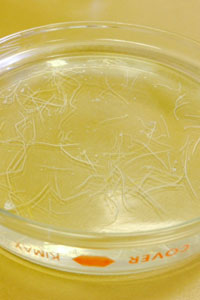 Kendall said the objective of this latest phase of research is to evaluate methods to control eyeworms and cecal worms in native bobwhite quail and evaluate efficacy of treatments in laboratory and field settings.

Rick Snipes, who serves as board president for the Rolling Plains Quail Research Foundation said he hopes this phase of research will lead to solid answers about how to deal with these parasites.

“I am convinced they were the cause of the devastating loss of quail on our ranch during the summer of 2010, since neither weather nor habitat could possibly have played a role in that catastrophe,” Snipes said. “At last there is real hope that we may be close to answers. All bird hunters and land stewards will benefit from the work being funded by the Rolling Plains Quail Research Foundation.”

Kendall said the research support from the Rolling Plains Quail Research Foundation has been outstanding in assisting him with expanding the investigation into the role of parasites on the health of bobwhite quail.

“This increased research support will assist us in expanding the science necessary to evaluate the degree of infected quail survival and reproductive capabilities, in addition to developing methods for control of these parasitic nematode infections,” he said. “The goal is sustainable wild bobwhite quail populations.”

Mysterious decline in quail population prompts the largest research project of its kind.