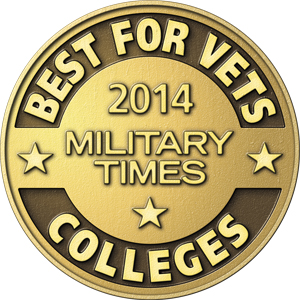 Texas Tech University recently was ranked 31st among four-year colleges in the Military Times 2014 “Best for Vets” list. Texas Tech was selected from more than 650 institutions that responded to a survey from the publication.

This year’s analysis placed a new emphasis on academic rigor in addition to service member enrollment, percentage of tuition covered by the GI Bill and availability of specific programs to help service members.

“Texas Tech’s strong commitment to active-service military members as well as veterans is indicative of a broader endeavor to improve our community, state and nation,” said Texas Tech President M. Duane Nellis. “Dr. Juan Munoz and the division of Institutional Diversity, Equity and Community Engagement ensure that students from all backgrounds receive the best possible education, and this award is a testament to this dedication. Members of the military are making enormous sacrifices, and we are proud to serve them in academic, financial and supportive programs.”

“Being named on the Military Times list for the second straight year is a great honor,” said Van Dusen. “This ranking is a testament that our world-class university is veteran supportive. Our students with military ties excel in the classroom and will soon become outstanding Red Raider alumni who will be leaders in business, education, the community, and the nation.”

In the rankings, Texas Tech was recognized specifically for its relaxed residency requirements, accepting American Council on Education credits and for having an office dedicated specifically to veterans. Last year, there were more than 600 military-affiliated students enrolled at Texas Tech.

“Providing support for military personnel, veterans and their families remains a top priority for the Texas Tech University System,” Texas Tech Chancellor Kent Hance said. “I am so proud of our efforts to serve those who have served our great community.”