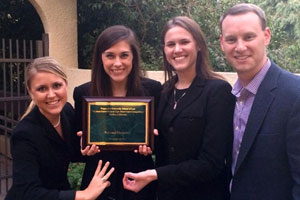 The team behind this most recent win, comprising Lauren Welch (’15) of Fort Worth, Katherine Handy (’15) of Plano and Stephanie Chipley (’14) of Arvada, Colo., defeated competitors from the University of South Dakota, University of the Pacific, Santa Clara University, Marquette University and Fordham University. In the national championship round, they defeated UC Hastings and claimed the third championship for Texas Tech Law at this competition in the past six years. Their advancement also marked the fifth time in the past six years that Texas Tech Law secured a spot in the final round.

In addition to winning the first-place plaque, Handy was named the tournament’s “Best Advocate” and Chipley’s brief placed third.

Hosted at Pepperdine University School of Law, the competition is judged by some of the best entertainment lawyers in the Los Angeles area.

“This competition deals with cutting-edge copyright, trademark, trade secret and First Amendment issues,” said Ashley Withers, who helped prepare the team for competition. “Competitors must demonstrate a high level of advocacy and legal analysis to succeed in this competition, which Katherine, Lauren, and Stephanie accomplished through their vast talent and attentive examination of the legal issues.”