The agreement formally establishes future collaboration between the two institutions. 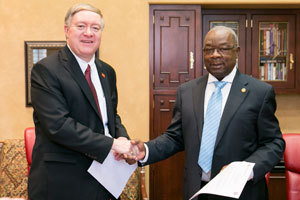 “This agreement presents Texas Tech with excellent opportunities for our university to partner with Equatorial Guinea’s National University,” Nellis said. “We look forward to a productive collaboration that will undoubtedly benefit both institutions in various ways.”

Equatorial Guinea is an emerging energy power in Sub-Saharan Africa, having quickly risen in several years to become Africa’s third-largest producer of oil. Equatorial Guinea is seeking to develop its infrastructure and human capital as well as diversify its economy, said Tibor Nagy, Texas Tech vice provost for international affairs. 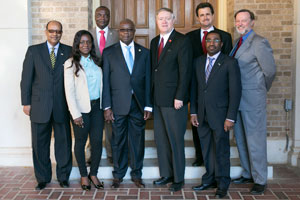 The agreement establishes collaboration between the two institutions.

“Equatorial Guinea represents a phenomenal opportunity as it is a country blessed with tremendous natural resources and is seeking U.S. partners for developing their engineering, agricultural and tourism related sectors,” Nagy said. “This is a perfect match for Texas Tech.”

Nagy said the current government of Equatorial Guinea is keenly interested in reversing the country’s past human rights problems by investing a significant portion of its oil revenues in human capacity development including its university system. Equatorial Guinea’s other U.S. partners include the University of South Carolina and Drexel University.

“International partnerships between universities are strengthening higher education around the globe,” said Chancellor Kent Hance. “This is a top priority of the Texas Tech University System, and I am proud of Dr. Nellis and his team for securing this collaboration that will expand the worldwide influence of Texas Tech and benefit our students, faculty and research enterprise.”