Greg Snodgrass is thankful for Collegiate Recovery Community, and helps others struggling with addiction. 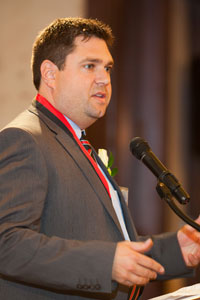 Texas Tech University’s motto, “From here, it’s possible,” certainly applies to alumnus Greg Snodgrass. Now he’s an advocate for others like him.

“The only reason I was able to get my education back and go to school after my substance abuse was because of the life-changing opportunity Texas Tech offered,” said Snodgrass. “It helped change my life by teaching me how to live in a healthy way through the Collegiate Recovery Community (CRC) program.”

The CRC, part of Texas Tech’s Center for Study of Addiction and Recovery (CSAR), is designed to provide recovering students a supportive environment that helps develop behaviors and skills necessary to flourish after recovery for their future careers. It is called a long-term program because a minimum of one year clean and sober to start the program is required.

Originally from Milwaukee, Snodgrass entered treatment for substance abuse at age 28. After completing treatment in California, a quick Google search led him to the CRC and Texas Tech.

“Alcohol and drugs were a big problem in my life that took me down,” he said. “There were not a lot of opportunities in 2004 for a non-traditional student like me, and Texas Tech was really the top university in the country to attend if you were looking for recovery.”

The program didn’t disappoint, and Snodgrass made the most of the opportunity.

Slowly but surely, he received scholarships that covered his out-of-state tuition and other costs.

During his time in the program, Snodgrass met the dean of the College of Human Sciences, Linda Hoover. She often visited CSAR events to get to know the students in the program, and Snodgrass said Hoover was very influential in helping with his education. 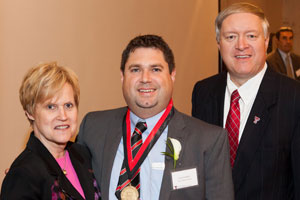 “When Greg was at Texas Tech, he held a leadership position in CSAR’s organization, and I got to know him because of that role,” said Hoover. “As a good student and member of the CSAR program, I knew he was determined to make a significant contribution. Greg is very kind, generous and grateful.”

Snodgrass earned his bachelor’s degree in human development and family studies in 2008, followed by his master’s in social work from Texas State University in 2012.

But it was Texas Tech’s CRC program that helped put him on the right track.

Before his recovery, he said he had lost everything and the CRC gave him hope that he could rebuild his life. At that point in time, he said he decided to dedicate his life to Texas Tech and do the best that he could.

“The program has an amazing staff to support someone that is in recovery to stay strong, choose the right direction for their career choice and help achieve academic success,” he said.

Snodgrass currently is the director of the CRC at the University of Alabama (UA). He was asked to replicate Texas Tech’s CRC program, which serves as the model program for universities nationwide. 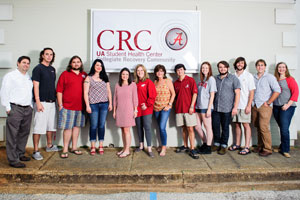 “We replicated the program at UA to give students the chance to come back to school, get help and finish their education,” Snodgrass said. “There is no other way I would be doing what I am doing now if it wasn’t for this program.”

Snodgrass still is a Red Raider at heart and proudly wears red and black in Alabama country. He continues to give back to Texas Tech by speaking to students about his struggles and the second chance he received through the CRC.

He was honored at the 2013 College of Human Sciences Distinguished Alumni Awards and received the New Achiever Award for his accomplishments.

“I have been clean for nine years, and will be clean for 10 this June,” Snodgrass said. “During my journey at Texas Tech, I had the opportunity to turn my life around and I did. Now I am a proactive advocate to others who struggle with substance abuse.”

Getting to Know:
Greg Snodgrass

The space outside between the library and the Student Union Building.

We are all over the country. I found a group of Red Raiders in Birmingham and Tuscaloosa, and just about everywhere I have gone.

My signed basketball from Bob Knight and signed football from Mike Leach.

It is important to get involved and take advantage of all the different opportunities that are available on campus. It’s also important to immerse yourself into the culture of the university.