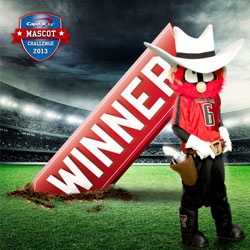 Raider Red, Texas Tech University’s costumed public relations mascot and reigning National Mascot of the Year, has made it to the elite eight for the playoff rounds of the Capital One 2013 Mascot Challenge. With a 9-3 record, Red took third place out of 16 mascots to contend for the most votes nationwide. The playoffs are a single-elimination vote over a three-week period.

Week one of the playoffs finds Red seeded No. 3 and competing against sixth-seed Smokey from the University of Tennessee. Red’s three regular-season losses came in week one against East Carolina’s PeeDee the Pirate, week three versus South Florida’s Rocky the Bull and week 10 against Wisconsin’s Bucky Badger.

“We are excited to be entering the playoffs again,” said Bruce Bills, mascot coach for Texas Tech. “This is a great opportunity for us to continue promoting Texas Tech and the Spirit Program to fans all across the country. Thank you to all the Red Raider fans out there that have been voting and getting Raider Red to this level.”

The Capital One National Mascot of the Year is determined by Internet voting. Fans can vote unlimited times at capitalonebowl.com/vote. Twitter voters must use the hashtag #CapitalOneRaiderRed. This voting season also incorporates 25- and 100-point challenges, involving weekly themes, photos and videos to be posted on social media.

This week’s 25-point challenge is “If your mascot started a country, what would it be called?” For 100 points, design a flag for the new country and upload a photo or video of it. Each upload also must use the #CapitalOneRaiderRed hashtag.

“Since the playoffs are single-elimination, we need everyone to vote as many times as they can, all week long,” Bills said.

The playoff voting will be conducted in three rounds over a three-week period today (Nov. 25) through Dec. 15. Based on the mascot rankings at the end of the regular season, each mascot was given a playoff seeding ranging from No. 1 to No. 8.