Final four includes a bull, a bird and a Spartan. 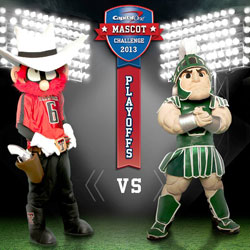 Raider Red, Texas Tech University’s costumed public relations mascot and reigning National Mascot of the Year, has made it to the final four in the playoff rounds of the Capital One 2013 Mascot Challenge.

Week two of the playoffs finds Red seeded No. 3 and competing against second-seed Sparty of Michigan State University. Raider Red bested Smokey from the University of Tennessee in the quarter finals. The playoffs are a single-elimination vote with only two rounds remaining.

This week’s 25-point challenge is “What is your mascot’s playoff superstition?” For 100 points, voters can upload a video or photograph supporting Red with a playoff beard. Each upload also must use the #CapitalOneRaiderRed hashtag.