Discovery leads to further discussion about 'ripples in spacetime.' 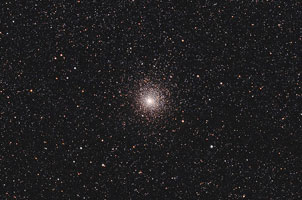 The black hole above was discovered in the M62 star cluster, which is 23,000 light years away from Earth. These star clusters contain some of the oldest stars in the galaxy. (click to enlarge)

A Texas Tech University astrophysicist was part of a team of researchers that discovered the first examples of black holes in globular star clusters in our own galaxy, upsetting 40 years of theories against their possible existence.

Tom Maccarone, an associate professor of physics, said the team detected the existence of the black holes by using an array of radio telescopes to pick up a certain type of radio frequency released by these black holes as they eat a star next to them.

The results were published in The Astrophysical Journal and featured in the National Radio Astronomy Observatory’s  ENews news bulletin.

“The stars can collide with one another in that environment,” Maccarone said. “The old theory believed that the interaction of stars was thought to kick out any black holes that formed. They would interact with each other and slingshot black holes out of the cluster until they were all gone.”

He compared it to water vapor coming off a hot cup of coffee. As some water molecules get hot enough to turn to steam, they are let go from their environment to float off into the atmosphere even though the coffee may be below the boiling temperature of water.

The old theory stated that the stars would kick the black holes out in the same fashion – occasionally, some black holes would have enough energy to escape the cluster, and gradually, they all would leave.

While the theory may still be displaced, Maccarone said it might still be somewhat true. Black holes might still get kicked out of globular star clusters, but at a much slower rate than initially believed.

The yellow circle shows the black hole found in the M62 star cluster in our Galaxy. The red circle denotes a neutron star close by.
(click to enlarge)

In 2007, Maccarone made the first discovery of a black hole in a globular star cluster in the neighboring NGC4472 galaxy. But rather than finding it by using radio waves, Maccarone found it by seeing an X-ray emission from the gas falling into the black hole and heating up to a few million degrees.

“Six years ago I had made the first discoveries in other galaxies,” he said. “It’s surprisingly easier to find them in other galaxies than in our own, even though they’re a thousand times as far away as these in our own galaxy are.”

This year, he and his team discovered two examples of globular star clusters in our own galaxy which host black holes by finding radio emission by using the Very Large Array of radio telescopes in New Mexico.

“As the black hole eats a star, these jets of material are coming out,” he said. “Most of the material falls into the black hole, but some is thrown outwards in a jet. To see that jet of material, we look for a radio emission. We found a few radio emissions coming from this globular star cluster that we couldn’t explain any other way.”

Maccarone said seeing black holes in globular clusters may provide a way for them to get close enough to one another to merge into bigger black holes.

“These mergers may produce the ‘ripples in spacetime’ we call gravitational waves,” he said. “Trying to detect gravitational waves is one of the biggest problems in physics right now, because it would be the strongest test of whether Einstein’s theory of relativity is correct.”

Other researchers included Laura Chomiuk and Jay Strader at Michigan State University; James Miller-Jones at Perth Curtin University in Perth, Australia; Craig Heinke at University of Alberta in Edmonton, Alberta, Canada; Eva Noyola at the University of Texas at Austin; Anil Seth at University of Utah; and Scott Ransom at the National Radio Astronomy Observatory in Charlottesville, Virginia.