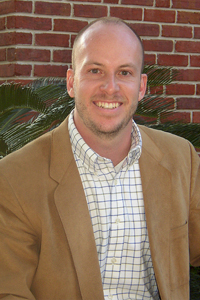 The whodunit lists read like alphabet soup: The CIA, the KGB, the FBI and LBJ. Don’t forget Fidel Castro and the Mafia. After 50 years, conspiracy theorists haven’t changed their most wanted lists.

However, investigations in the past 10 years point squarely to Lee Harvey Oswald as the lone gunman, said one Texas Tech University expert.

“Conspiracy theorists have at least seven favorite suspects, some working together, and countless theories on how the assassination was carried out,” said Sean Cunningham, an associate professor of history. “If you visit Dealey Plaza in Dallas, you’ll likely find dozens of self-employed conspiracy ‘tour guides’ who claim to know the ‘real truth’ of what happened. They may try to convince you that a gunman fired from the gutters or that the limo driver did it. The fact is that the John F. Kennedy assassination continues to captivate the imagination and has become a multi-million-dollar-a-year industry. There’s a great amount of investment in keeping conspiracies alive.”

As the years have gone by, Cunningham said more people have shed the conspiracy theories and embraced the lone gunman theory. New technology and revelations in the past 10 to 15 years have all pointed to Oswald as the only guilty party.

“Forensic science and technology have come a long, long way in recent years,” he said. “Today, we know far more about how different types of bullets travel once fired and what they do to different types of materials upon impact. Researchers have gone to great lengths in an attempt to ‘recreate’ the assassination, and in virtually every study that I’m aware of, the results of those recreations confirm that Kennedy was killed by a lone gunman firing from the sixth floor of the Texas School Book Depository. Forensic scientists have reexamined autopsy photos, x-rays of the President’s brain, and all of them point to a single shooter firing from behind. The scientific community is almost unanimous in this conclusion.”

One fact people don’t typically realize is that JFK struggled with a number of physical ailments, including Addison’s disease. 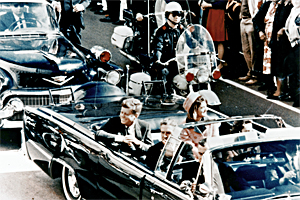 President Kennedy in the limousine on Main Street in Dallas, minutes before the assassination.

“He was constantly receiving injections of cortisone and other steroid injections, along with other medications, and he wore a back brace,” Cunningham said. “You can’t understand the bullet wounds he suffered without understanding that he was wearing a back brace, which propped him up and made him an easier target. It limited his movement.”

Cunningham says the JFK and Lincoln assassinations hold an allure that McKinley and Garfield’s assassination do not – national drama.

“Abraham Lincoln was the first U.S. president to be assassinated, and that happened days after General Lee’s surrender at Appomattox,” he said. “The nation hadn’t begun to recover from the Civil War, and the assassination was a horrifying end to a horrifying struggle. With Kennedy, the entire event was broadcast on television, and this was the first opportunity for the relatively new medium to cover an event of this magnitude. The JFK assassination was, therefore, one of the nation’s first collective experiences.”

Following the assassination, Mrs. Kennedy spent a significant amount of energy to construct a legacy for her husband that mirrored Abraham Lincoln’s, helping to cement Kennedy’s place in history, Cunningham said. She used Lincoln’s funeral as a model. As Lincoln was described as The Great Emancipator, she worked to portray her husband as a supporter and champion of the less fortunate and of the early Civil Rights Movement. 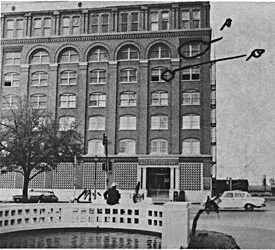 The Texas School Book Depository, marked to show the window (A) in which the witness saw a man with a rifle, and the window (B) on the fifth floor in which he saw people watching the motorcade.

And though the Kennedy assassination did play a part in the changing of America’s trust and belief in itself, more complex issues bubbled under the surface long before, he said.

Trouble had brewed in Vietnam since the Truman years, and the Civil Rights Movement had begun in the ’50s.

“This event is the baby-boom generation’s 9/11,” he said. “People point to Nov. 22, 1963, as a turning point – as the end of American innocence. But so many other things contributed to the unraveling of American confidence during the ’60s, including Vietnam and civil rights. It’s a much longer, more complicated story than people realize.”