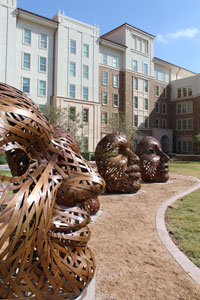 Four Faces is located in the courtyard west of the J.T. and Margaret Talkington Hall.

Visitors to Texas Tech University will now be greeted by the latest addition to the system-wide public art collection: Four Faces, designed by Michael Stutz.

Stutz, who resides in Rainbow, Cali., applied his signature woven bronze technique when constructing the $350,000 project. The concept of Four Faces celebrates the diversity and experience of college life.

“I’m pleased to be a part of your campus and hope students’ interpretation of the faces will remain open,” Stutz said. “The program at Texas Tech is one of the top in the country for public art, and for any artist to be a part of the collection is quite an honor.”

Stutz said the faces represent individual personalities, like the students on campus, but use humor and humanity to promote observation, expression and collaboration. Students and visitors are encouraged to walk up to the faces, pose for photos and observe the pieces from every angle, as the faces look drastically different from front to back.

The TTU System Public Art Committee selected Stutz’s project from 11 applicants. Digital planning for the piece began in December 2012, and the construction process began in March with the help of two full-time assistants.

“What I love about these pieces is that that the differences in the gender, race and those kinds of features became more and more blurred the farther in the process the faces went. I’ve had people who have worked on them for weeks and can’t even tell the difference,” Stutz said. “I think it’s because of the abstraction of the piece, but also when you take away things like color, we really are all very similar.” 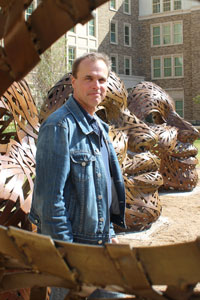 While the differences between the faces may not be easily identified, the exaggerated scale and unusual woven structure represent the artist’s unique introduction into sculpture.

Although he pursued painting in college and his early career, after moving to New Orleans for his wife to attend graduate school, Stutz said the only work he could find was building floats for the annual Mardi Gras parades.

During his work on the floats, he pioneered his woven method, using strips of lightweight materials to “draw” in three-dimensional space. He has since evolved this technique to incorporate more permanent materials.

Stutz said he drew inspiration from the drama and excitement of these parades that he still applies to his pieces today.

“My heart was a little part of this public celebration, and that’s what I try to do today – engage in the theater of everyday life. I try to find what’s unique about the situation, and then accentuate it with my work.”

The TTU System’s Public Art Program was initiated by the Board of Regents in 1998 as an investment in the campus environments at each of its institutions. Through the program, public artworks are funded using one percent of the estimated total cost of each new major capital project. Since then, 92 items created by some of today’s leading artists have been added to the TTU System’s campuses.