“Assassination of a President' exhibit currently is on display at the Southwest Collection. 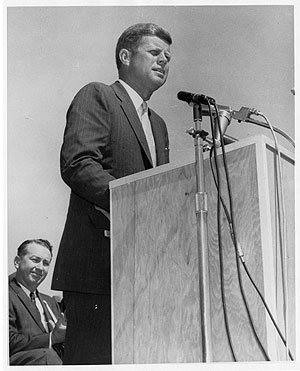 Many Americans will reflect upon the life, leadership and legacy of President John F. Kennedy on the anniversary of his death, but even 50 years later – the tragic event continues to be a subject for researchers.

At Texas Tech’s Southwest Collection/Special Collections Library, materials from the Waggoner Carr and George Mahon Collections focus on Kennedy’s visit to Texas, his assassination and the aftermath.

“Assassination of a President: An Exhibit to Mark the 50th Anniversary of the Tragic Death of John F. Kennedy” is currently on display at the Southwest Collection.

Photos, assassination related documents, copies of the Warren Commission Report and many books written on the subject are presented in two separate exhibit cases, accompanied by a recording of a radio broadcast made on Nov. 22, 1963.  The exhibit will be on display through Jan. 31, 2014.

“We have copies of depositions taken by the Dallas Police Department and Dallas County Sheriff’s Department for people in Dealey Plaza that day, as well as for Lee Harvey Oswald, his wife Marina, and Oswald’s assassin, Jack Ruby,” said Southwest Collection Archivist Monte Monroe.

Congressman George Mahon was part of the Texas delegation travelling with President Kennedy on the day of the assassination.

“Mahon was a very influential and respected man in Washington,” said Jennifer Spurrier, associate dean of the Southwest Collection/Special Collections Library. “He served District 19 for more than forty years through the Great Depression, World War II, Vietnam, into the Carter administration.”

Mahon took many notes in the hours, days and weeks following the assassination, and he saved everything, Spurrier said. They are included among the wide variety of items given to Texas Tech in 1977. Mahon’s collection also included letters and telegrams to and from constituents, as well as other memorabilia related to Kennedy’s Texas tour. 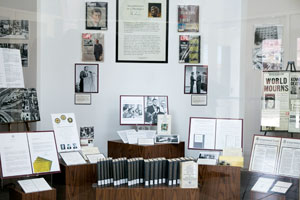 “Assassination of a President: An Exhibit to Mark the 50th Anniversary of the Tragic Death of John F. Kennedy.”

The most important collection in the archive relating to the assassination belonged to Texas Tech alumnus and former regent Waggoner Carr, who was elected Texas Attorney General in 1963. On the morning of Nov. 22, he dined with President John F. Kennedy and the first lady in Fort Worth.

Carr and his wife, Tech alumna, Ernestine Storey Carr accompanied the presidential party from Austin, to San Antonio, to Houston, and Fort Worth, but due to a speaking engagement in the Texas Panhandle, they were unable to attend the parade through Dealey Plaza. As the two men said their goodbyes, Kennedy expressed gratitude for all the hard work Texans had done for the Democratic Party. He thanked Carr for a pleasant visit saying that he and Mrs. Kennedy were “bowled over” by the warm and tremendous reception by the citizens of Texas.  The president said he looked forward to seeing him again when Carr rejoined the tour that evening in Austin.

Dr. Robert Carr, of Lubbock, said his brother learned of a shooting incident while his plane was still in the air. It was not until he landed however, that he found out President Kennedy was dead. Waggoner Carr had only shaken hands with President Kennedy about 45 minutes before his assassination.

Because Kennedy’s murder fell under the jurisdiction of Texas, Carr was the man to release the President’s body, and he was also the man to launch the initial investigation. The probe quickly escalated to the federal level; and from that point forward, Carr worked closely with the Warren Commission appointed by Kennedy’s successor, President Lyndon B. Johnson.

Artifacts from the George Mahon Collection

The final 888-page report was submitted ten months later and concluded that Lee Harvey Oswald acted alone. The findings have since proven controversial, but despite conspiracy theories, Carr always maintained that the state-federal probe was thorough, professional and an overall success. He insisted that both teams worked very well together.

“He worked hand-in-glove with the Warren Commission, and because of his close involvement and the fact that he was privy to all evidence,” Monroe said, “he contended to the end of his life that Lee Harvey Oswald was the lone assassin.”

In 1967, Carr sent copies of his materials, which comprised more than 2,500 items, to Texas Tech. An even larger donation of his personal and political papers followed in 1988.

Waggoner Carr also wrote a letter to his brother Robert in 1995, where he refuted four popular rumors - including a conversation depicted in the movie, “JFK.” Read the letter.

Monroe was the last person to interview Carr before his death in 2004. He believes the Waggoner Carr Papers are a valuable compliment to records housed in the Federal Government archives or the Sixth Floor Museum at Dealey Plaza.

“The Waggoner Carr Papers are a key resource for anyone doing research into the Kennedy Assassination,” Monroe said. “We are extremely proud to have them.”