Red Raiders defy odds by earning 4-0 sweep in last round to share title. 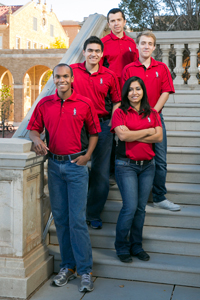 Members of the Texas Tech chess team, along with coach Alex Onishuk, far back.

The Texas Tech University chess team won the title of co-champions at the 17th Annual Texas Collegiate Championships on Nov. 10 in Houston.

“Going into the last round, the odds on paper were worse than 80-1 of pulling off the 4-0 sweep we needed to catch University of Texas-Dallas (UTD),” said Al Lawrence, Texas Tech chess program director. “But our team kept believing, ‘From here, it’s possible!’ And from we did it.”

“UTD sent six players with international grandmaster titles to the event,” said Alex Onishuk, coach of the chess team. “Although we fielded only two grandmasters, we played some of our new recruits, who performed spectacularly under pressure.”

Lawrence, a former executive director of the U.S. Chess Federation and of the World Chess Hall of Fame, arrived in July of 2012 to lead the team.

“The best thing I’ve accomplished for the chess team is bringing in Coach Onischuk to Texas Tech,” Lawrence said. “He is a former U.S. champion who has made a key difference in training at all levels, not just at the top, and he’s a recruit magnet for young stars.”

Last March, Texas Tech outscored UTD and the University of Texas-Brownsville at the Southwest Collegiate Team Champions to repeat as regional champs. Yaroslav Zherebukh, a Texas Tech freshman majoring in general studies from Lviv, Ukraine, is ranked one of the top players in the world under 21 and won the individual Southwest championship.

The Texas Tech Chess Program will host the Pan-American Intercollegiate Team Chess Championship Dec. 27-30 at the Overton Hotel. It will be the first time the “World Series of Chess” has been held in Lubbock. Spectators are welcome.