'A Perfect Fit: The Garment Industry and American Jewry' was one of 13 books honored nationally. 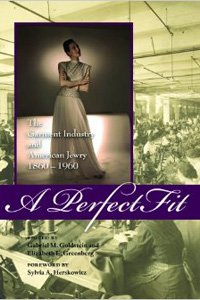 A Texas Tech University Press (TTUP) publication was among the 13 titles announced at this year’s American Library Association conference as being the “Best of the Best.”

The Association of American University Presses (AAUP) along with the Association of School Librarians presented “A Perfect Fit: The Garment Industry and American Jewry (1860-1960)”, edited by Gabriel M. Goldstein and Elizabeth E. Greenberg, as a selection.  A panel of public and secondary school librarians reviewed and evaluated almost 400 titles published by members of the AAUP to create the list.

“Having a book named a ‘Best of the Best’ represents the culmination of many years of hard work and determination by our editors and staff,” said Robert Mandel, director of Texas Tech University Press. “This honor also demonstrates that TTU Press can now compete toe-to-toe with the best and most prestigious university publishers in the country.”

“Best of the Best” highlights a variety of titles from universities across the nation. “A Perfect Fit” speaks about the “rag trade” era, a time when Jewish immigrants took over the American fashion world.

The AAUP comprises more than 130 non-profit scholarly publishers dedicated to scholarship and creativity. This is the second year in a row a TTUP title has made the list.