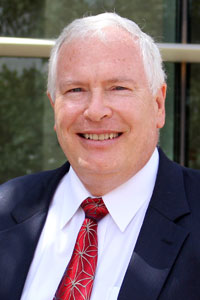 Texas Tech University President M. Duane Nellis today (Oct. 11) named Robert V. Duncan to the position of vice president for research. Duncan currently is the vice chancellor for research at the University of Missouri and will assume his new role January 1.

“We are pleased and honored to welcome Dr. Duncan to Texas Tech University,” Nellis said. “Dr. Duncan’s extensive backgrounds in teaching, research and as vice chancellor for research at the University of Missouri combine to provide a strong vision and effective leadership as we move forward as one of the nation’s leading research institutions.”

As vice president for research, among Duncan’s primary responsibilities will be working to enhance Texas Tech’s research profile as the university strives to become a tier one national research university.

“Texas Tech is an institution on the rise nationally and the higher education community is noticing the emergence and respects the progress the university is making,” Duncan said. “I am proud for the opportunity to serve on President Nellis’ leadership team, and I very much look forward to working together with the many talented faculty, staff and students in continuing the impressive advancement of this great university.”

Founder and interim director of the Sidney Kimmel Institute for Nuclear Renaissance at Missouri, Duncan’s background as a leader in the field of physics is reflected in his many publications, professional appointments, and activities. Duncan was the founding director of the New Mexico Consortium’s Institute at the Los Alamos National Laboratory in 2006, following his appointment as the associate dean for research in the College of Arts and Sciences at the University of New Mexico (UNM).

In addition to his positions at Missouri and New Mexico, Duncan was a visiting associate in physics at Caltech for the last 15 years and was a joint associate professor of electrical and computer engineering (2000-08). He earned tenure in 1998 and was promoted to professor of physics and astronomy at UNM in 2001. He began his teaching career as a teaching assistant within the Experimental Atomic Physics Laboratory at Massachusetts Institute of Technology (MIT) in 1981, and then he served as head teaching assistant in the Department of Physics at The University of California, Santa Barbara in 1983.

Duncan’s experience extends beyond the classroom into industrial and economic development. He currently serves on numerous boards, including the Missouri Innovation Corporation that operates the MU Life Sciences Incubator at Monsanto Place. Prior to his academic career, Duncan served as a physicist at Sandia National Laboratories for seven years (1988-95), attaining the rank of Distinguished Member of Technical Staff, where he initially developed new quantum electrical standards and later led the Cryogenic and Superconducting Technologies Team. Duncan served as a NASA principal investigator on a fundamental physics experiment from 1993 to 2004.

A well-published and researched author throughout his career, Duncan is a Fellow and life member of the American Physical Society. He recently chaired the Panel on Fundamental Physics in Space for the Decadal Survey of the National Academy of Sciences.

Duncan has maintained an active presence in the community as a four-year executive board member of the Columbia (Mo.) Chamber of Commerce and he is currently the president of the Great Rivers Council Eagle Scout Association, and he serves on the Council Board of Directors.

A 1982 physics graduate from MIT, Duncan received a Ph.D. in physics from the University of California, Santa Barbara in 1988.

Duncan’s wife, Dr. Annette L. Sobel, M.D., M.S., has been appointed to the faculty at the Texas Tech Health Sciences Center School of Medicine as an associate professor in the Department of Medical Education. Sobel earned a bachelor’s degree in chemistry from Rutgers University (1979), M.D. from Case Western Reserve University (1983) and M.S. in aerospace medicine/human factors engineering (1992).