Faith Jurek was elected as the National ACT president. 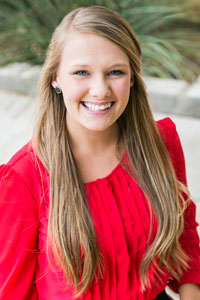 Texas Tech University student Faith Jurek was introduced to the agriculture world when she moved to Texas in seventh grade.

After Jurek moved to Texas from Delaware, she immediately joined the National FFA Organization after being inspired by her FFA adviser.

“It was kind of a melting pot when I moved to Texas,” said Jurek, a graduate student in agricultural communications from Goldthwaite. I got involved in my local FFA chapter and was given the opportunity to do some public speaking,”

After actively participating in FFA and in the journalism-based UIL competitions throughout high school, Jurek decided she would put the two together and pursue a career in agricultural communications.

“I thought it would be cool to go to school somewhere that had a really awesome agricultural communications program,” Jurek said. “Since Texas Tech has such a great program and awesome professors, I knew it was just the best choice for me.”

National ACT is a collegiate organization which develops and strengthens agricultural communication students through professional opportunities and educational programs.

Jurek first became involved with Texas Tech’s local ACT chapter as a freshman after attending Ag Fest, an annual a back-to-school event for students to get involved in agriculture organizations.

“ACT is a really cool organization to be a part of as far as agricultural communications goes,” Jurek said.

While an undergraduate, she served as president and secretary in the local chapter and secretary/treasurer at the national level.

“ACT in general has a special place in my heart,” Jurek said. “I’ve gained invaluable experiences through the organization and just by holding leadership roles on the local level here at Texas Tech.”

Jurek said it is an honor to serve as president this year, especially after being selected by collegiate members from all over the nation.  National ACT officer candidates are selected based on their dedication to the agriculture industry, leadership and ACT involvement at the local level.

“Between all of my classes, extra-curricular opportunities and mentor experiences, I feel 100 percent confident that Texas Tech has prepared me for this leadership role,” she said.

During her presidency, Jurek wants to create a scholarship program for students and build stronger alumni and student relations by creating a mentor program.

Jurek said she is grateful for the opportunities she has received at Texas Tech.

“I could have gone anywhere for college, but as far as the mentors I have had here, the organizations I have been a part of,  and the curriculum taught, it’s just perfect,” she said. “Being the National ACT president is just the cherry on top.”

Getting to Know
Faith Jurek

Being a member of the 2011 National Champion Meat Judging Team.

Is there someone who has helped make your time at Texas Tech memorable?

In the College of Agricultural Sciences and Natural Resources (CASNR), I think we have a good core group of professors that really focus on their students. For me, Courtney Meyers, Erica Irlbeck in agricultural communications—Mark Miller in animal and food sciences served me really well in my undergraduate career.

The atrium of COWamongus! in the Animal and Food Science’s building.

The Masked Rider because it has a direct tie to the agriculture industry.

I like how we’re all connected here and the support system is huge.  Everyone in CASNR has been so supportive of me throughout the years.

What would you say to prospective students?

I know in CASNR our professors are always trying to prepare us for what’s next in the industry and give us a sense of job security by providing us with applicable knowledge.  Not to mention tradition is really strong here in Red Raider land.