The sculpture represents the energy and breadth that goes into every business. 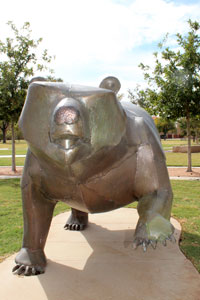 Sculpture portrays the volatile nature of the market.

Texas Tech University System Officials recently celebrated the latest addition to its system-wide public art collection, We Are in the Business of Changing the World, designed by BC Sculpture.

The artists, Tara Conley of Houston and Joe Barrington of Throckmorton, created a multi-element installation located in the courtyard south of the Rawls College of Business that represents the various elements of business from the local to global level.

Students entering the building can now pass under two bent-pipe arches with a bull and a bear on each side of their path to class. According to Conley, this part of the piece both directly and abstractly represents today’s market.

The two arches are made of 240 separate pieces, representing the multitude of individuals working together in the business world.

The installation also includes six bronze plate “icons” arranged around a circle on the ground that display various commodities native to the Lubbock region and community including corn, oil and cotton.

The circle is surrounded by several phrases engraved in limestone that pertain to how people and business relate to the world.

“When choosing the phrases, we thought about the students’ relationship to the piece as they go through school at Texas Tech,” Conley said. “While one phrase might attract them now, years later it may be another phrase they truly identify with.”

The artists answered a special request when Chancellor Kent Hance was inspired by the words included in the piece. The sidewalk leading up to the sculpture now includes a phrase familiar to all Red Raiders, “Dream No Little Dreams,” Hance’s favorite motto.

Conley and Barrington were selected from 58 applicants on the basis of their firm grasp on the many different aspects of business and their desire to create an installation using visual language business students would recognize and identify with.

This is the largest single public art expenditure for the TTU System public art collection to date and includes LED lights that Conley said add to the strength and energy of the piece.

The TTU System’s Public Art Program was initiated by the Board of Regents in 1998 as an investment in the campus environments at each of its institutions. Through the program, public artworks are funded using one percent of the estimated total cost of each new major capital project. Since then, 91 items created by some of today’s leading artists have been added to the TTU System’s campuses.

About the Texas Tech University System
The Texas Tech University System is one of the top public university systems in the state of Texas, consisting of four component institutions and operating at 12 academic sites and centers.  Headquartered in Lubbock, Texas, the TTU System has an annual operating budget of $1.7 billion and approximately 17,000 employees focused on advancing higher education, health care, research and outreach.

In 2012, total research expenditures approached $200 million and total enrollment exceeded 43,700 students for the first time in the TTU System’s history. Whether it’s contributing billions of dollars annually in economic impact or being the only system in Texas to house an academic institution, law school, and medical school at the same location, the TTU System continues to prove that anything is possible.