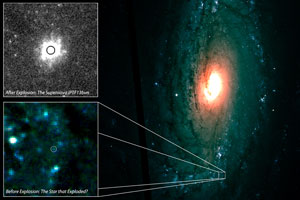 This is the first time scientists have pinpointed a star that eventually exploded as a stripped-envelope supernova, called a type Ib, said David Sand, an assistant professor in the Department of Physics who developed the camera.

The global team of astrophysicists, led by Yi Cao of Caltech, found the supernova on June 16. Their research was published online Aug. 30 in the peer-reviewed journal The Astrophysical Journal Letters.

“It is very rare to catch a supernova within a day or two of explosion,” Sand said. “Up until now, it has happened at most about a dozen times. It is equally rare that we actually have Hubble Space Telescope imaging of the location of the supernova before it happened, and we were able to see the star that eventually exploded.”

Sand said it took 73 million light years for the illumination from the star’s explosion to travel to Earth. 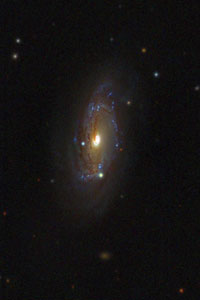 Image of iPTF13bvn.
Green dot is the supernova.

“This star was quite far away in the galaxy NGC 6805, although we would consider it a ‘local’ galaxy,” he said. “There is no way of knowing if something so far away has any planets around it. However, it is unlikely. We found that the supernova came from what is called a Wolf-Rayet star. It is very massive and very young. It likely did not live long enough to form planets.”

Wolf-Rayet stars are known to have stellar winds where they eject some of the material off their surface and spew it out into space. Observations indicate they are devoid of hydrogen, but contain helium in the remaining outer layer of the star.

Their massive size leads to a speedy demise, Sand said. Where our sun is roughly 5 billion years old, this star was only in the tens of millions of years old. Wolf-Rayet stars tend to burn up all of their fuel quickly in order to support their own weight because the nuclear burning balances out gravity.

Cues from the spectroscopic camera images led researchers to classify their discovery as a type Ib supernova, which are thought to be the explosions of these massive stars that have lost their outer layers right before their death due to a stellar wind.

Exact details of what happens in these supernovae are murky, he said. When they do explode, they burn roughly as bright as five billion of our suns.

The Intermediate Palomar Transient Factory project, which is a scientific collaboration with California Institute of Technology, Los Alamos National Laboratory, University of Wisconsin and several others, is an automated survey of night sky dedicated to finding transient supernova events. The survey finds hundreds of new supernovae annually, and scientists here try to understand what types of stars become which types of supernova.

Sand led the development and operations of the special camera, the FLOYDS spectrograph, which was used to help identify the specific kind of supernova. Taking a spectroscopic image helps scientists to tell what kind of supernova they’re looking at by splitting the supernova’s light up into the colors of the rainbow. 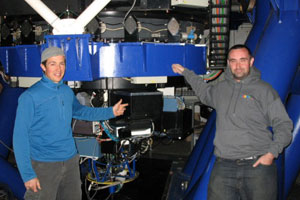 A normal photograph isn’t enough to tell, he said.

The FLOYDS spectrographs, of which there are only two in the world, are attached to two-meter telescopes located in Hawaii and Australia. The cameras operate completely robotically allowing scientists to confirm supernova earlier than ever before.

In the last six months, Sand and others have confirmed 25 different supernovae with the new camera. This particular supernova is one of the first published results.

“This is where FLOYDS comes in, and its robotic nature, which lets us study supernovae young,” Sand said.  “That’s the first story. The second story is this lucky Hubble imaging from 2005. Someone took an image with Hubble of the galaxy where this supernova happened. Just sheer luck – nothing to do with the supernova or seeing into the future or anything.  Zoom to 2013, and we discover the supernova within a day of its explosion. We look in the Hubble data archive and notice the image from eight years prior, and we just match it up with our most recent data to see if there is a star in the old image at the exact same position as the supernova today.

“The second story really is luck, but it is happening more and more these days as the Hubble telescope collects more images of nearby galaxies.”

Sand said scientists can take another Hubble image at the location of the supernova after it has faded away.  If the star that he and others identified as the progenitor to the supernova has disappeared, then they will know which star died. Otherwise, if the star is still there, then the supernova came from some other object too faint for researchers to see, and the mystery continues.