The recital of Latin-American dances is free and open to the public. 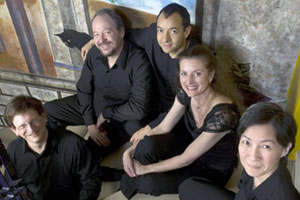 The Mexico City Woodwind Quintet is performing a recital of Latin-American dances at 8 p.m. Oct. 4 in Hemmle Recital Hall at Texas Tech University. The recital is free and open to the public.

The Mexico City Woodwind Quintet is regarded as one of the most important chamber performances in Mexico. It gained acclaim through participation in music festivals such as the International Cervantino Festival, the International New Music Forum and the Franco Donatoni International Contemporary Music Festival. They also performed in concerts sponsored by the Mexican Fine Arts Institute, the National Arts Council and the National University.

The group previously presented world premieres of works commissioned by the group and performed Mexican premieres of contemporary quintet literature by international composers.

In addition to performing as a group, the musicians maintain an active schedule as soloists, recitalists and orchestral musicians in two major orchestras: the National Symphony Orchestra and the Mexico State Symphony Orchestra. They each are on the faculty of four conservatories.

The Mexico City Woodwind Quintet will present an open lecture on Mexican music in the 20th century at 5 p.m. Oct. 3 in Hemmle Recital Hall. The lecture will include a performance by the quintet and interaction with the audience. The lecture will set the stage for the recital of Mexican and Latin American music Friday evening.

Dancing at the Crossroads: A Cultural Collision