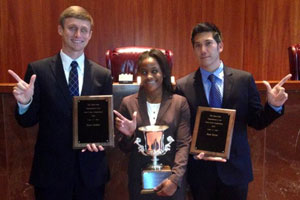 In addition to its first-place finish, the team – comprising second-year students Jesse Beck of Southlake, Brittney Ervin of Canyon and Richard Keeton of Las Vegas, Nev. – won further acclaim with Beck’s naming as the “Best Oralist” in the final round and Keeton’s recognition for “Best Brief.”

Sponsored by the Texas State Bar’s Administrative and Public Law Section, the competition is well attended by law students across the state. The Texas Tech Law team’s success was particularly exciting for Luke Reeves (’14), editor-in-chief of the Administrative Law Journal published in partnership with the State Bar of Texas.

“Yet again, Professor Sherwin showed how stellar his advocacy program is,” said Reeves. “We are very proud of the team and our very own Brittney Ervin, staff editor on Administrative Law Journal.”

Alumnae Cara Brewer (’13) and Lauren Murphree (’13) of the Lubbock County Criminal District Attorney’s Office were instrumental in preparing the team. Brewer served as the team’s coach, and Murphree helped judge the team in practice rounds.

“These exceptional students came to every practice ready to work,” said Brewer, a former student advocate. “They were poised and brilliant, and I could not have been more proud of the way they represented the law school at this competition.”