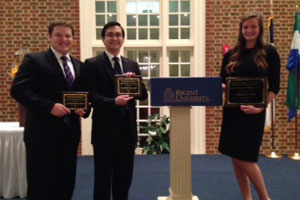 Texas Tech Law’s team – composed of third-year student Aaron Tatyrek of Vernon, and second-year students Bridget O’Shaughnessy of Austin and Drew Robertson of Fort Worth – defeated defending champion Liberty University School of Law in the quarterfinal round. The team then prevailed over Florida Coastal School of Law in the semifinal round and in-state rival University of Houston Law Center in the championship round.

In addition to taking the top prize, Robertson’s brief placed fourth in the tournament and Tatyrek was recognized as the third-best oralist.

“This competition was unique in that the issues to be argued were not split amongst the team members,” said Ashley Withers, the team’s coach and associate director of Employer Relations for the law school’s Career Services office. “Rather, Aaron and Bridget individually argued both issues for twenty minutes on behalf of their respective clients. The team embraced the new format and invested many hours ensuring that their arguments were concise, well-supported, and persuasive.

“Aaron, Bridget, and Drew are each incredibly talented, but it was with hard work and practice that they secured the win,” Withers said. “I look forward to seeing these advocates shine in future competitions and in the practice of law.”