The scholarship is offered to students pursuing a career in science and international political affairs. 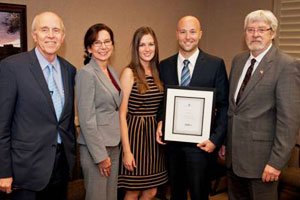 Howell, second from right, received the scholarship accompanied by his wife Tessa.
Hance, Rogers and Chesser are also pictured.

The new scholarship is offered to students who wish to pursue a career in science and international political affairs, and honors the memory of Robin J. Copeland (1965-2011).

Copeland had roots in West Texas and had a distinguished career in diplomacy, nonproliferation and scientific engagement. Fluent in seven languages, she worked with several entities during her career including the United States Department of Energy, Department of State, Civilian Research Development Foundation and US embassies worldwide, often under difficult and demanding conditions. Her roles required keen skills in political science, technical science and engineering.

“Robin was an outstanding diplomat and an exceptional individual with a lot of energy,” said Ron Chesser, director of the Center for Environmental Radiation Studies. “She was a friend to Texas Tech and a good friend to a lot of us. She is dearly missed.”

In memory of Copeland’s unique career roles, the scholarship is awarded to Texas Tech University undergraduate, graduate or law students who:

“Texas Tech wants to recognize academic qualities that form the foundation for leadership,” Hance said. “This scholarship is a way to honor students with talent and ambition like Robin’s, and I believe Eric is an outstanding candidate to honor her memory.”

Howell received the inaugural scholarship and commemorative certificate during a ceremony on campus attended by Texas Tech officials as well as Chesser and Brenda Rogers, professors in the Department of Biological Sciences.

A graduate of the University of Idaho with a degree in biology, Howell currently is pursuing a doctorate in the Department of Biological Sciences. He recently served as project manager at the International Atomic Energy Agency in Vienna, Austria, overseeing international collaborations between more than 20 countries and multiple agencies within the U.S. government as part of the Iraq Decommissioning Project. He also spent eight months gaining experience in international affairs and diplomacy through his work at the U.S. Embassy in Baghdad.

“It’s an honor to receive this award, and it could not have been possible without these great once-in-a-lifetime opportunities that have been extended to me by my peers and colleagues,” Howell said. “I hope that my accomplishments both at Texas Tech and the International Atomic Energy Agency can bring honor not only to my university, but to the name of Robin J. Copeland.”

Among many other achievements in his educational career, Howell has received four competitive research grants, authored three publications in peer-reviewed scientific journals and received numerous awards for outstanding scholarship, research and performance, including being named the 2013 Texas Tech University Graduate Student of the Year.

“Eric’s accomplishments are incredible, and he will continue to be a fine ambassador of Texas Tech,” Rogers said. “Robin was a fine colleague, a very impressive diplomat and also a dear friend, so it is quite an honor to have one of my graduate students be the first recipient of the scholarship that bears her name.”