Writer strikes bone gold in the dust of West Texas. 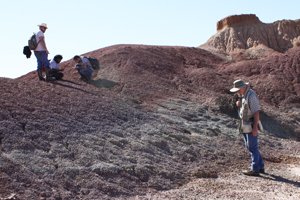 The fossil hunt included, from left, graduate students John-Henry Voss, Zujjaj Talpur and Jared Stoffel. Bill Mueller, assistant curator in the Paleontology Division at the Museum of Texas Tech, served as the guide.

The Toyota truck plunges down a steep embankment into a valley before coming to a stop just past a cow tank.

The air is cool and crisp on this October morning. I’m on a ranch in Crosby County, but I’m actually walking 230 million years into the past with a paleontologist and three graduate students. Erosion has exposed the remains of a world dominated by reptiles and still recuperating from one of the worst extinction events the planet has ever known.

Our surroundings look like standard West Texas ranchland at first glance. However, Bill Mueller, assistant curator in the Paleontology Division at the Museum of Texas Tech, serves as my guide in a strange forest of Triassic conifers and ferns. He explains what we would have seen as we walk toward the walls of the shallow canyon. The team will cover about 200 acres of this ghost forest today. As Mueller speaks, I ignore the mesquite and cacti, look past the cattle and feral hog tracks and imagine a humid, tropical landscape teeming with life.

Traveling Back in Time

We’re near the banks of a huge river on the supercontinent of Pangea, he says. Larger than the modern Mississippi but close in nature and appearance, this unnamed waterway ran through what today is Texas, New Mexico and Arizona before ending in Nevada and dumping into the Panthalassic Ocean.

The water drew animals, and all around us hungry carnivores with sharp teeth patrolled the shores for a meal or waited under the water to ambush an unwitting snack. 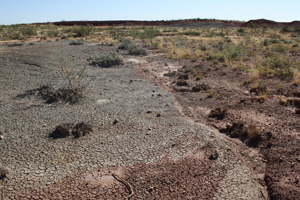 “So back then, we would have been in danger walking around out here,” I ask.

“That’s right,” Mueller says with a laugh. “This would not have been a good place for us to be.”

On this day, the group prospects for fossils. Different from excavation where a team digs through the soil, Mueller and his team merely look along the hillsides for anything rain and wind have exposed.

That’s how he discovered a skull of Metoposaurus, one of the recognizable animals living in this weird woodland. This aquatic amphibian resembled a salamander, except their jaws came equipped with needle teeth for eating fish. They grew up to 10 feet long and weighed about 1,000 pounds.

Mueller discovered just the nose of the skull poking through the dirt. Getting the fossil out of the ground was paramount, he said. Once metoposaurid skulls start to get wet, they degrade into pieces. He and two graduate students removed the skull immediately.

“The chances of that happening are slim to none,” Mueller says. “But if we find something really good, we’ll cover it in Tyvek and bury it until we can come back after deer season and excavate it.”

As Mueller relates the day’s game plan to the students, I look down to find a long, thin object pressed into the soil. I wonder if it’s an arrowhead at first because of the sharp tip, but then I change my mind. 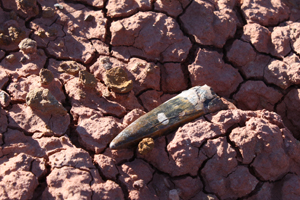 The three-inch black rock belonged in the jaws of a fairly large phytosaur – a long, crocodile-like animal.

Sure enough, Mueller explains that the three-inch black rock belonged in the jaws of a fairly large phytosaur – a long, crocodile-like animal with a skinny mouth and nostrils near its eyes so that it didn’t have to lift its whole head out of the water when it breathed. This tooth was one of about 38 to 40 others that lined the animal’s mouth.

The danger around us suddenly becomes patently clear.

The first find of the day goes into a bag, and I’m listed as the finder.

“Your name will forever be in the record as the finder of this tooth,” Says Jared Stoffel, a geochemistry master’s student from Huntington, Ind. “What do you think about that?”

This is Stoffel’s first time out in the field. Though he doesn’t intend to become a paleontologist, he says this course work is intended to make him more well-rounded in his field.

“This is the first time I’ve been in the field in Texas, and all I’ve found is petrified poop,” he jokes.

The droppings, called coprolites, litter the ground. Some of them can be identified. Mueller holds up one with a distinctive screw shape and explains it came from freshwater sharks. Others are anyone’s guess. It’s clear by what’s left behind that lots of eating took place in this forest, though.

As he finds bits of bone, he quizzes the students on the animal it belonged. A rounded piece about three inches long turns out to be a jaw from a phytosaur, and the students all have a turn trying to decipher the contours and make a match.

“I teach them osteology while we’re here,” he says. “You rarely find anything complete. Most of what you find is broken.”

You also need to know if you stumble upon an animal yet to be described. In Mueller’s research, he has found 22 undescribed species in a 40-acre spot near Post. And while that number is highly unusual, he says chances of discovering a new animal can happen while prospecting. 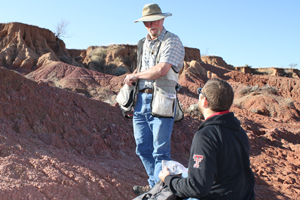 Past trips have uncovered evidence that Postosuchus also hunted these grounds, Mueller says, and they find evidence of these bipedal apex predators in this canyon and throughout West Texas on a fairly regular basis. They are named after the city of Post just south of Lubbock, and the 13- to 16-foot-long beasts are related to crocodiles. The smaller carnivorous dinosaurs just making an appearance on our planet didn’t stand a chance against this monster’s huge jaws and killer teeth.

Zujjaj Talpur, a museum sciences graduate student from New Jersey, hopes that he finds that fully-articulated skeleton in the dust today. This is his first time to work in the field in Texas, although he has hunted fossils on the East Coast.

“In the places where I’ve looked, we get more invertebrates,” he says. “Here, there are a lot more coprolites and a lot more fragments of bone.”

As the students continue looking for fossils on the hillside, Mueller leads me to “the ponds.”

Out in the valley of the canyon, two gray blotches contrast against the red dirt. A long, yellow streak across the gray shows where an ancient tree fell into the water. The clay left behind tells the story of two freshwater ponds that drew lumbering herbivorous dicynodonts in for a drink. Perhaps their shallow depths made them a safer rest stop than the river, because this is the only place in the canyon where fossils of the mammal-like reptiles turn up.

When we return to the canyon wall, John-Henry Voss, a museum sciences master’s student from Natchitoches, La., discovers a fossilized scale nesting in the dust. The scale belonged to an Aetosaur, a bizarre armored herbivore with protective spikes along its sides that acted something like an armadillo. He beams as he puts it into the bag.

Professor Alan Grant from Michael Crichton’s “Jurassic Park” serves as Voss’s inspiration, and he explains that he wants to be a collections manager in a museum. He prefers to be outside on the hunt for fossils rather than reporting on them.

“This is the best option for me,” he says. “You get to go out into the field and do this.”

What: Elementary and junior high school students can see real fossils, do arts and crafts and learn about the animals

Where: Located at Fourth Street and Indiana Avenue