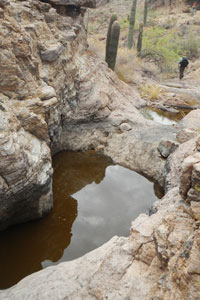 Manmade catchments in the Sonoran Desert area of the U.S. originally built to help wildlife may be doing more harm than good, as ammonia levels found in them may be hazardous to animals and to humans, say researchers from Texas Tech University.

Their findings are published in The Wildlife Society Bulletin.

Their research found that water catchments constructed in the Sonoran Desert often have levels of ammonia that are in the lethal range for aquatic organisms and may be high enough to impact terrestrial wildlife as well as humans. Natural water catchments, also called tinajas, did not have elevated ammonia likely because water flows through them and does not stagnate to the level that it does in the constructed ones.

“We have pictures of people filling up water jugs and drinking large amounts of this water, which takes this from a wildlife management issue into the realm of human health” said Griffis-Kyle. “We build these structures to capture water and help wildlife, but we may be doing way more harm than good.”

Griffis-Kyle said the natural rock pools, or tinajas, as well as the constructed catchments in the Sonoran Desert provide water for a wide variety of organisms.

“In 2012, we monitored water quality and amphibian and dragonfly use of wildlife waters in southwestern Arizona,” she said. “We measured ammonia concentrations that exceeded the U.S. Environmental Protection Agency’s guidelines for aquatic life and were well above concentrations that cause mortality in amphibians and other aquatic organisms.” 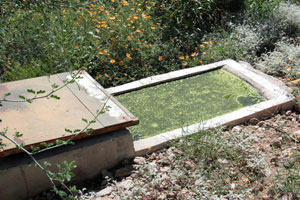 Bradatan said it is impossible at this stage to get direct information on what the effect this high ammonia concentration has on humans.
“However, we used indirect data to show that there is an increase in the mortality of humans crossing through the Sonoran Desert that might be due to this increasing concentration of ammonia,” Bradatan said.

Griffis-Kyle said both amphibians and dragonflies had lower species richness in catchments than in the tinajas, and amphibian species richness was negatively associated with ammonia concentration. The concentrations of ammonia alone cause concern for the management of biodiversity, specifically for wetland-dependent organisms. Also, she said, ammonia concentrations may be high enough to impact terrestrial organisms of economic and conservation importance including humans.

“Ammonia accumulates from the decomposition of organic matter and excrement from organisms,” she said. “Whereas flash floods can remove accumulated debris from tinajas, there is no natural mechanism to remove organic material from catchments.”

The team’s short paper came from one of those “ah-ha” moments that happens during the course of collecting field data and is the first in a series of papers exploring the impacts of ammonia on mammals, amphibians, invertebrates and overall biodiversity.