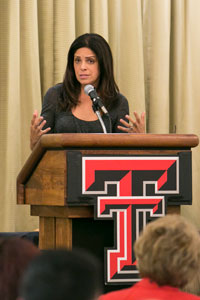 O’Brien, the originator of CNN’s Black in America and Latino in America among other documentaries on diversity and race, is the daughter of a black Cuban mother and an Australian father and one of six children. Her background shaped many of her experiences and influenced the trajectory of her career.

“What my parents taught me was that a life that was worth living was something you had to dictate for yourself,” O’Brien told the sold-out crowd at the McKenzie-Merket Alumni Center. “You have a worthy story to tell. And if you don’t tell it, then who will?”

O’Brien said diversity in storytelling-or, journalism-is crucial because there are so many different perspectives, it can be easy for the media to place marginalized groups in a certain pre-defined box of what that group is known for in the U.S.

“We don’t tell enough stories about a certain group, but communities are a mix of things,” O’Brien said. “For students in this room, you have an opportunity to stand for something-to be a symbol for what you can achieve.”

However, O’Brien explained to the crowd that her career was not always so smooth. After dropping out of Harvard University, O’Brien landed her first job in media as a “staple remover” at a television station. She said, in the beginning of her career especially, she received negative feedback for her race and name. However, with a dedication toward bettering her reporting skills and a determination to hold difficult conversations, she eventually made a name for herself. 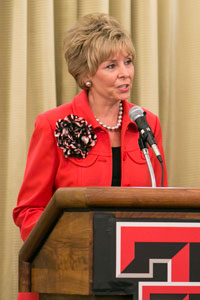 “From my perspective it was all with an eye to opening a conversation,” O’Brien explained. “With respect to diversity you can have awkward and uncomfortable conversations. But you can’t move forward unless you have these difficult conversations and hold people accountable.”

O’Brien said her reporting has taught her much about human nature: that, at the end of the day, regardless of their background or experiences, people all basically want the same thing.

“People would say to me, ‘I really want to send my kid to a good school,’ or ‘I want my family to live in a safe neighborhood,’” she said.

Despite what people are shown on television, people live and work together even though we come from very different places, she said.

“This is what Texas Tech is all about: excellence in diversity,” Muñoz said. 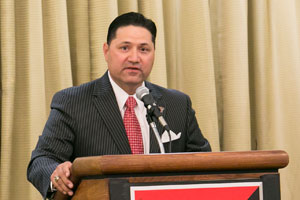 White serves as assistant city manager for the City of Lubbock. He has held a variety of community positions and served on the state advisory council on Early Childhood Education & Care as well as the Drug Policy Advisory Board, the United Way Board, the Success by 6 Board and the Youth Corps Board. He has been honored by Delta Sigma Theta and the Black Chamber of Commerce for his contributions to the community.

Wong is associate chair and associate professor in the Department of History, as well as director of the European Studies program. She is a two-time Fulbright scholar to Italy and has published extensively on race, nationalism and identity in modern Italy. She is the Faculty Senate president and is the faculty liaison to the Cross-Cultural Academic Advancement Center where she helped develop the Open Teaching Concept: Teaching Diversity Across the Curriculum program.

Strong retired as the director of Texas Tech’s Upward Bound programs in 2007. Since then, he has continued to dedicate his time to education and service to disadvantaged and underrepresented groups and is active in several civil organizations. He is one of three co-founders of Tomorrow’s Leaders, a mentoring program for at-risk fifth graders. He serves as director of the Roots Historical Arts Council and has received several community awards and recognition. He is best known for his work as a nationally recognized storyteller, featured on NPR, the BBC and the Discovery Channel on issues of tolerance, hope and self-esteem.

M. Duane Nellis, Texas Tech University President also spoke during the program, recognizing the success Texas Tech has had in the area of diversity, including ranking among the top 50 undergraduate institutions for Hispanic and American Indian baccalaureate degrees as well as the many departments and programs that provide support and services to students from varied backgrounds.

“Congratulations to those recognized tonight and thank you all for your contributions,” Nellis said.